Who's who of Dr Who 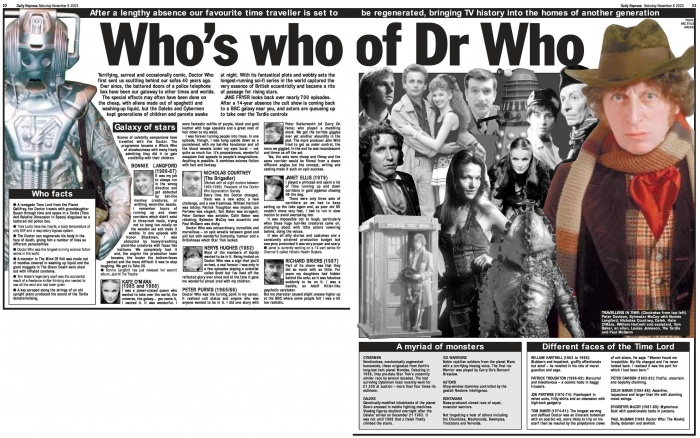 After a lengthy absence our favourite time traveller is set to be regenerated, bringing TV history into the homes of another generation

Terrifying, surreal and occasionally comic, Doctor Who first sent us scuttling behind our sofas 40 years ago. Ever since, the battered doors of a police telephone box have been our gateway to other times and worlds.

The special effects may often have been done on the cheap, with aliens made out of spaghetti and washing-up liquid, but the Daleks and Cybermen kept generations of children and parents awake at night. With its fantastical plots and wobbly sets the longest-running sci-fi series in the world captured the very essence of British eccentricity and became a rite of passage for rising stars.

JANE FRYER looks back over nearly 700 episodes. After a 14-year absence the cult show is coming back to a BBC galaxy near you, and actors are queueing up to take over the Tardis controls

Scores of celebrity companions have travelled with the Doctor. The programme became a Who's Who of showbusiness with many freely admitting they did it to gain credibility with their children.

It was my job to always run in the wrong direction and get abducted by bat-like monkey creatures, or writhing worm-like beasts. I remember hours of running up and down corridors which didn't exist in three-inch heels, trying not to bang too noisily on the wooden set and make it wobble. In one episode with Honor Blackman, I was abducted by heavy-breathing plant-like creatures with faces like bottoms. We completely lost it and, the angrier the production team became, the louder the bottom-faces panted and the more difficult it was to stop laughing. We got to Take 26.

Bonnie Langford has just released her second album, Jazz At The Theatre

I was a power-crazed queen who wanted to take over the world, the universe, the galaxy... you name it, I wanted it. It was wonderful. I wore fantastic outfits of purple, black and gold leather with huge epaulets and a great nest of hair down to my waist.

I was forever turning people into trees. In one episode, though, I was hung upside down as a punishment with my bat-like henchman and all the blood vessels under my eyes burst — not quite so much fun. It's preposterous, wonderful escapism that appeals to people's imaginations. Anything is possible. It combines science fiction with fact and fantasy

(Worked with all eight doctors between 1965-1989). President of the Doctor Who Appreciation Society

Every time the Doctor changed, there was a new actor, a new challenge, and a new freshness. William Hartnell was tetchy; Patrick Troughton was impish; Jon Pertwee was elegant; Tom Baker was arrogant; Peter Davison was amiable; Colin Baker was rebuking; Sylvester McCoy was eccentric and Paul McGann was dishy.

Doctor Who was extraordinary, incredible and marvellous — an epic wrestle between good and evil but with wonderful humanity, humour and a Britishness which Star Trek lacked.

Most of the members of Equity wanted to be in it. Being invited on Doctor Who was a sign that you'd arrived, a real honour. I was only in a few episodes playing a scientist called Scott but I've lived off the reflected glory ever since and at the time it gave me wonderful street cred with my children.

Doctor Who was the turning point in my career. It realised cult status and anyone who was anyone wanted to be in it. I did one story with Peter Butterworth (of Carry On fame) who played a meddling monk. We got the terrible giggles over yet another absurdity in the plot. The more producer John Wild tried to get us under control, the more we giggled. In the end he was incandescent and threw us off the set.

Yes, the sets were cheap and flimsy and the same corridor would be filmed from a dozen different angles but the concept, writing and casting made it such an epic success.

I played a princess and spent a lot of time running up and down corridors in gold pyjamas chasing K9 the dog.

There were only three sets of corridors so we had to keep setting up the take again and, as poor old K9 couldn't move very fast, I had to run in slow motion to avoid overtaking him.

It was impossible not to laugh, particularly when these huge bull-like creatures came on, stomping about with little actors cowering behind, doing the voices.

It was all silly stories and costumes and a constantly strained production budget but everyone pretended it was very proper and scary.

Part of its charm was that they did so much with so little. For years my daughters had hidden behind the sofa, so it was fabulous suddenly to be on it. I was a baddie, an Adolf Hitler-like psychotic caretaker.

But my character caused slight unease higher up at the BBC where some people felt I was a bit too realistic.

A myriad of monsters

Genetically modified inhabitants of the planet Skaro encased in mobile fighting machines. Viewing figures doubled overnight after the Daleks' arrival on December 21 1963. It was not until 1988 that a Dalek finally climbed the stairs.

Noble reptilian soldiers from the planet Mars with a terrifying hissing voice. The first Ice Warrior was played by Carry On's Bernard Bresslaw.

Not forgetting a host of others including the Chumblies, Mechanoids, Swampies, Tractators and Vervoids.

Different faces of the Time Lord

WILLIAM HARTNELL (1963 to 1966): Stubborn and impatient, gruffly affectionate but aloof — he revelled in his role of moral guardian and sage.

TOM BAKER (1974-81): The longest serving and daffiest Doctor was an itinerant bohemian with an acerbic wit, more likely to trip on his scarf than be mauled by the polystyrene claws of evil aliens. He says: "Women found me irresistible. My life changed and I've never looked back. I realised it was the part for which I had been born."

PAUL McGANN (1996 Doctor Who: The Movie): Dishy, debonair and devilish.