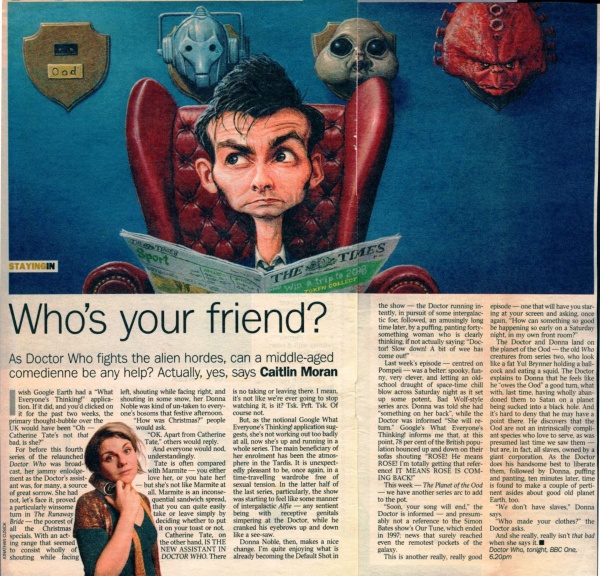 As Doctor Who fights the alien hordes, can a middle-aged comedienne be any help? Actually, yes, says Caitlin Moran

I wish Google Earth had a "What Everyone's Thinking!" application. If it did. and you'd d clicked on it for the past two weeks, the primary thought-bubble over the UK would have been "Oh Catherine Tate's not that bad, is she?"

For before this fourth series of the relaunched Doctor Who was broadcast her jammy enlodgement as the Doctor's assistant was, for many, a source of great sorrow. She had not, let's face it, proved a particularly winsome turn in The Runaway Bride — the poorest of all the Christmas specials. With an acting range that seemed to consist wholly of shouting while facing left, shouting while facing right, and shouting in some snow, her Donna Noble was kind of un-taken to everyone's bosoms that festive afternoon.

"How was Christmas?" people would ask.

"OK. Apart from Catherine Tate," others would reply. And everyone would nod. understandingly.

Tate is often compared with Marmite — you either love her, or you hate her! — but she's not like Marmite at all. Marmite is an inconsequential sandwich spread, that you can quite easily take or leave simply by deciding whether to put it on your toast or not.

Catherine Tate, on the other hand, IS THE NEW ASSISTANT IN DOCTOR WHO. There is no taking or leaving there. I mean, it's not like we're ever going to stop watching it is it? Tsk. Prft. Tsk. Of course not.

But as the national Google What Everyone's Thinking! application suggests, she's not working out too badly at all, now she's up and running in a whole series. The main beneficiary of her enrolment has been the atmosphere id the Tardis. It is unexpectedly pleasant to be, once again, in a time-travelling wardrobe free of sexual tension. In the latter half of the last series, particularly. the show was starting to feel like some manner of intergalactic. Alfie — any sentient being with receptive genitals simpering at the Doctor, while he cranked his eyebrows up and down like a see-saw.

Donna Noble, then, makes a nice change. I'm quite enjoying what is already becoming the Default Shot in the show — the Doctor running intently, in pursuit of some intergalactic foe; followed an amusingly long time later, by a puffing, panting forty-something woman who is clearly thinking, if not actually saying "Doctor! Slow down! A bit of wee has come out!"

Last week's episode — centred on Pompeii — was a better spooky. funny. very clever, and letting an old-school draught of space-time chill blow across Saturday night as it set up some potent, Bad Wolf-style series arcs. Donna was told she had "something on her back", while the Doctor was informed "She will return.' Google's What Everyone's Thinking! informs me that, at this point. 78 per cent of the British population bounced up and down on their sofas shouting "ROSE! He means ROSE! I'm totally getting that reference! IT MEANS ROSE IS COMING BACK!" week — The Planet of the Ood — we have another series arc to add to the pot.

"Soon, your song will end," the Doctor is informed — and presumably not a reference to the Simon Bates shows Our Tune. which ended in 1997; news that surely reached even the remotest pockets of the galaxy.

This is another really, really good episode—one that will have you staring at your screen and askingonce again. How can something so good be happening so early on a Saturday night in my own front room?'

The Doctor and Donna land on the planet of the Ood — the old Who creatures from series two, who look like a fat Yul Brynner holding a ball-cock and eating a squid. The Doctor explains to Donna that he feels like he "owes the Ood" a good turn, what with, last time, having wholly abandoned them to Satan on a planet being sucked into a black hole. And it's hard to deny that he may have a point there. He discovers that the Ood are not an intrinsically compliant species who love to serve, as was presumed last time we saw them but are in fact all slaves, owned by a giant corporation. As the Doctor does his handsome best to liberate them, followed by Donna. puffing and panting. ten minutes later, time is found to make a couple of pertinent asides about good old planet Earth, too.

"We don't have slaves," Donna says.

"Who made your clothes?" the Doctor asks.

And she really. really isn't that bad when she say's it.