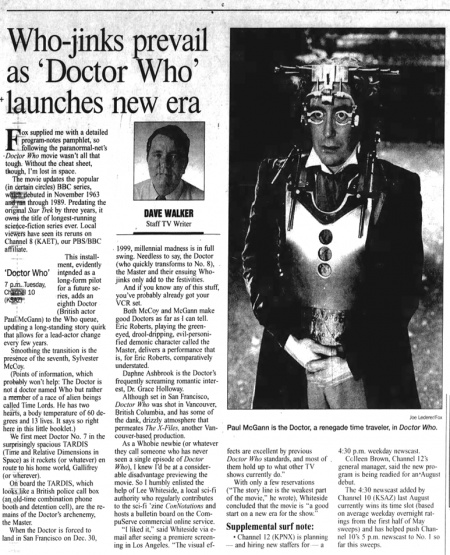 Fox supplied me with a detailed program-notes pamphlet, so following the paranormal-net's Doctor Who movie wasn't all that tough. Without the cheat sheet, though, I'm lost in space.

The movie updates the popular (in dertain circles) BBC series, wlittlebuted in November 1963 amen through 1989. Predating the ongmal Star Trek by three years, it owns the title of longest-running science-fiction series ever. Local viewers have seen its reruns on Channel 8 (KAET), our PBS/BBC affiliate.

This installment, evidently intended as a long-form pilot for a future series, adds an eighth Doctor (British actor Paul McGann) to the Who queue, updating a long-standing story quirk that fillows for a lead-actor change every few years.

Smoothing the transition is the presence of the seventh, Sylvester McCoy.

(Points of information, which probably won't help: The Doctor is not a doctor named Who but rather a member of a race of alien beings called Time Lords. He has two hearts, a body temperature of 60 degrees and 13 lives. It says so right here in this little booklet.)

We first meet Doctor No. 7 in the surprisingly spacious TARDIS (Time and Relative Dimensions in Space) as it rockets (or whatever) en route to his home world, Gallifrey (or Wherever).

On board the TARDIS, which looks like a British police call box (an old-time combination phone booth and detention cell), are the remains of the Doctor's archenemy, the Master.

When the Doctor is forced to land in San Francisco on Dec. 30, 1,999, millennial madness is in full swing. Needless to say, the Doctor (who quickly transforms to No. 8), the Master and their ensuing Who-jinks only add to the festivities.

And if you know any of this stuff, you've probably already got your VCR set.

Both McCoy and McGann make good Doctors as far as I can tell. Eric Roberts, playing the green-eyed, drool-dripping, evil-personified demonic character called the Master, delivers a performance that is, for Eric Roberts, comparatively understated.

Although set in San Francisco, Doctor Who was shot in Vancouver, British Columbia, and has some of the dank, drizzly atmosphere that permeates The X-Files, another Vancouver-based production.

As a Whobie newbie (or whatever they call someone who has never seen a single episode of Doctor Who), I knew I'd be at a considerable disadvantage previewing the movie. So I humbly enlisted the help of Lee Whiteside, a local sci-fi authority who regularly contributes to the sci-fi 'zine ConNotations and hosts a bulletin board on the CompuServe commercial online service.

"I liked it," said Whiteside via email after seeing a premiere screening in Los Angeles. "The visual effects are excellent by previous Doctor Who standards, and most of them hold up to what other TV shows currently do."

With only a few reservations ("The story line is the weakest part of the movie," he wrote), Whiteside concluded that the movie is "a good start on a new era for the show."

Caption: Paul McGann is the Doctor, a renegade time traveler, in Doctor Who.