Who You Calling A Racist? 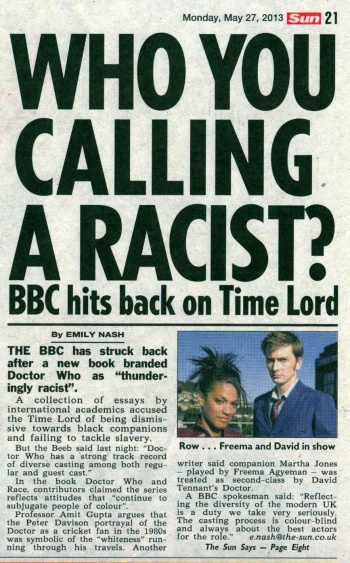 BBC hits back on Time Lord

THE BBC has struck back after a new book branded Doctor Who as "thunderingly racist".

A collection of essays by international academics accused the Time Lord of being dismissive towards black companions and failing to tackle slavery.

But the Beeb said last night: "Doctor Who has a strong track record of diverse casting among both regular and guest cast."

In the book Doctor Who and Race. contributors claimed the series reflects attitudes that "continue to subjugate people of colour".

Professor Amit Gupta argues that the Peter Davison portrayal of the Doctor as a cricket fan in the 1980s was symbolic of the "whiteness" running through his travels. Another writer said companion Martha Jones — played by Freema Agyeman — was treated as second-class by David Tennant's Doctor.

A BBC spokesman said: -Reflecting the diversity of the modern UK is a duty we take very seriously. The casting process is colour-blind and always about the best actors for the role."