Who are you, Doctor Who? 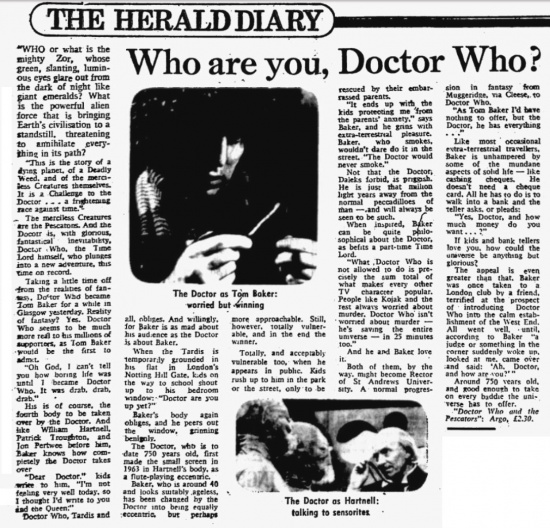 "WHO or what is the mighty Zor, whose green, slanting, luminous, eyes glare out from the dark of night like giant emeralds? What is the powerful alien force that is bringing Earth's civilisation to a standstill, threatening to annihilate everything in its path?

"This is the story of a dying planet, of a Deadly Weed, and of the merciless Creatures themselves. It as a Challenge to the Doctor ... a frightening race against time.'

The merciless Creatures are the Pescatons. And the Docotr is, with glorious, fantastical inevitability. Doctor Who, the Time Lord himself, who plunges into a new adventure, this time on record.

Taking a little tune off from the realities of fantasy, Doctor Who became Tom Baker for a whale in Glasgow yesterday. Reality of fantasy? Yes. Doctor Who seems to be much more real to his millions of supporters, as Tom Baker would be the first to admit.

"Oh God. I can't tell you now boring life was until I became Doctor 'Who. It was drab, drab, drab."

His is of course, the fourth body to be taken over by the Doctor. And like William Hartnell, Patrick Troughton, and Jon Pertwee before him, Baker knows how completely the Doctor takes over.

"Dear Doctor," kids write to him, "I'm not feeling very well today, so I thought I'd write to you and the Queen."

Doctor Who, Tardis and all, obliges. And willingly, for baker is as mad about his audience as the Doctor is about Baker.

When the Tardis is temporarily grounded in his flat in London's Notting Hill Gate. Kids on the way to school shout up to his bedroom window: "Doctor are you up yet?"

Baker's body again obliges, and he peers out the window, grinning benignly.

The Doctor, who is to date 750 years old, first made the small screen in 1963 in Hartnell's body, as a flute-playing eccentric.

Baker, who is around 40 and looks suitably ageless, has been changed by the Doctor into being equally eccentric, but perhaps more approachable. Still, however, totally vulnerable, and in the end the winner.

Totally, and acceptably vulnerable too, when he appears in public. Kids rush up to him in the park or the street, only to be rescued by their embarrassed parents.

"It ends up with the kids protecting me from the parents' anxiety." says Baker, and he grins with extra-terrestrial pleasure. Baker, who smokes, wouldn't dare do it in the street. "The Doctor would never smoke."

Not that the Doctor, Daleks forbid, as priggish. He is just that million light years away from the normal peccadilloes of than — and will always be seen to be such.

When inspired, Baker can be quite philosophical about the Doctor, as befits a part-time Time Lord.

And he and Baker love it.

Both of them, by the way, might become Rector of St Andrews University. A normal progression in fantasy from Muggeridge, via Cleese, to Doctor Who.

"As Tom Baker I'd have nothing to otter, but the Doctor, he has everything

Like most occasional extra-terrestrial travellers. Baker is unhampered by some of the mundane aspects of solid life — like casting cheques. He doesn't need a cheque card. All he has to do is to walk into a bank and the teller asks, or pleads:

If kids and bank tellers love you, how could the universe be anything but glorious.

The appeal is even greater than that. Baker was once taken to a London club by a friend, terrified at the prospect of introducing Doctor Who into the calm establishment of the West End. All went well until, according to Baker "a judge or something in the corner suddenly woke up, looked at me, came over and said: 'Ah. Doctor, and how are you?"

Around 750 years old, and good enough to take on every baddie the universe has to offer.

The Doctor as Hartnell: talking to sensorites

The Doctor as Tom Baker: worried but winning