Who do you think you are, scaring my innocent child? 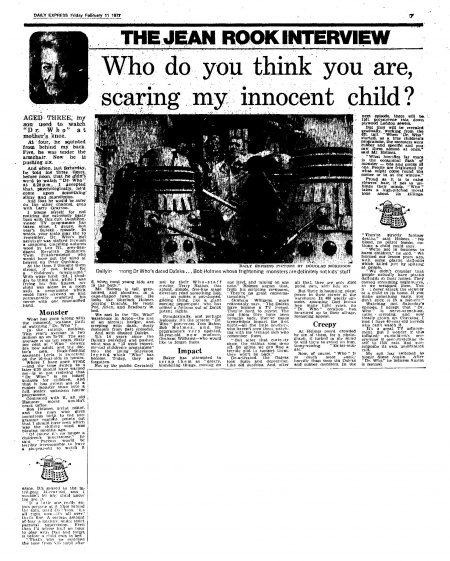 AGED THREE, my son used to watch "Dr. Who" at mother's knee.

At four, he squinted from behind my back. Five, he was under the armchair. Now he is pushing six.

And when last Saturday, he told me three times, before noon, that he didn't want to watch "Dr. Who" at 6.20 p.m., I accepted that, psychologically, he'd come upon something slimy and monstrous.

And that he would be safer on the other channel, even with Larry Grayson.

I blame myself for not noticing the extremely nasty turn with this cult, 14-millionviewer TV programme has taken since, I gauge. last year's Sutekh episode. In which. your scalp may stir to remember, Dr. Who's girl assistant was stalked through a snapping, crackling autumn wood by two 7ft. grey-bandaged Egyptian mummies. Twin Frankensteins who would have put the wind of heaven up Peter Cushing.

At the time. I thought them strong, if not fetid, for A "children's programme." With wiser hindsight. I shudder to think that, while I was trying his fish fingers, my child was alone in a room with a programme which could have screwed up and permanently crunched his nerve with one mummified hand.

What has gone wrong with the innocent, teatime thrill of watching "Dr. Who" ?

In the ratings, nothing. This year's average is two million up on 75-76. The age average is up ten years. Sixty per cent of "Who" viewers are now adult. and the doctor's new, thigh-flashing assistant Leela, is switching on the 16-year-olds in hordes.

Where I have gone wrong —and the time switch to a later 6.20 should have warned me—is in not realising that " Dr. Who " is no longer suitable for children. And that it has grown out of a rubber monster show into a full, scaley. unknown horror programme.

Compared with it, an old Hammer movie wouldn't crack toffee.

Bob Holmes, script editor, and the man who gives monstrous birth to the programme content, points out that I should have seen which way the chilling wind was blowing months ago.

Of course it's no longer a children's programme," he said. " Parents would be terribly irresponsible to leave a six-year-old to watch it alone. It's geared to the intelligent 14-year-old and I wouldn't let any child under ten see it.

If a little one really enjoys peeping at it from behind the sofa. until Dad says, 'it's all right now—it's all over' that's fine. A certain amount of fear is healthy, under strict parental supervision. Even then I'd advise half an hour to play with Dad and forget it before a child goes to bed.

"That's why we switched the time from 5.15 until after 6, when most young kids are in the bath."

Mr. Holmes is tall, grey-haired. and bloodless, in a cape-shaped fawn mac. He looks like Sherlock Holmes playing Dracula. He reads Poe, Arlen, and Bradbury in bed.

We met in the "Dr. Who" warehouse in Acton—the size of an aircraft hangar, and creeping with dank, dusty monsters from past episodes.

And with disused Daleks.

It's 14 years since the Dalek's swivelled and pushed what was a "12 week experimental children's programme" into the living television legend which "Who" has become. Today, they are forgotten.

Not by the public. Certainly not by their Who-staff creator. Terry Nation, (his actual, simple, five-line stage direction read something like, on comes a pot-shaped, gliding thing, like a giant moving pepper-pot), who has coined a fortune out of Dalek patent' rights.

Paradoxically, and perhaps jealously, it's the present "Dr. Who" presenters Tom Baker, Bob Holmes, and the programme's very updated, 33-year-old new producer, Graham Williams—who would like to forget them.

Baker has attempted to scrap them as "dreary, blundering things, moving on one level, and talking on one note." Holmes argues that, from his scripting viewpoint," They're no great conversationalists."

Graham Williams, more reasonably, says, "The Daleks have become a TV legend. They're hard to repeat. The odd times they have been brought back, they've made tremendous impact the first night—all the little brothers, who haven't seen them, watching with the teenage kids who remember them.

"But after that curiosity show, the ratings soon drop off. So unless we can find a terrific plot to support them, they won't be back."

De-activated, the Daleks look dusty and depressing. Like old dustbins. And, after monsters are definitely not kids' stuff all that, they are only £500 pedal cars, with lids on.

But there is haunting, silent power in their corner of the warehouse. In 400 weekly episodes, spanning God knows how many light years, no "Dr. Who" creation has measured up to ' their all-age, menacing appeal.

As Holmes posed, crowded by six of them, for a photograph, it lurked in my mind to will them to swivel on him, tinny-voicing "Ex-ter-min-ate."

Now, of course, "Who" is so much more subtly horrific than soup tin Daleks and rubber monsters. In the next episode, there will be 15ft. polystyrene rats. down plywood London sewers.

But they will be revealed gradually, working from the 6ft. tail. " When 'Dr. Who' started, as a true children's programme, the monsters were rubber and specific and you saw them almost at once," said Mr. Holmes.

"What horrifies far more is the occasional flash of monster — bits and pieces of one. People are frightened by what might come round the corner or in at the window."

Proud as it is to raise viewers' hair, if not to unhinge their minds. "Who" takes a high-pitched moral tone about its killings.

"They're strictly fantasy deaths," said Holmes. "No blood, no petrol bombs, nothing a child could copy.

"We're not in business to harm children," he said. "We learned our lesson years ago, with some plastic daffodils which killed just by spitting at people.

"We didn't consider that people actually have plastic daffodils in their homes. They caused screaming nightmares, so we scrapped them. You must never attack the security of a child in its home. If you make something nasty, you don't stick it in a nursery."

Watching last Saturday's episode, I accept that "Dr. Who" is nerve-wrenching, spine - gripping. and now totally grown up. Checking, I find I have 40-year-old friends who can't watch it.

It's a great TV achievement. But I wonder if this inflated, ex-children's programme is over-stretching itself to 15ft. rats. And worshipping its own, uninhibited cult.

My son has switched to bionic Steve Austin. After " Dr. Who," he believes Austin is normal.