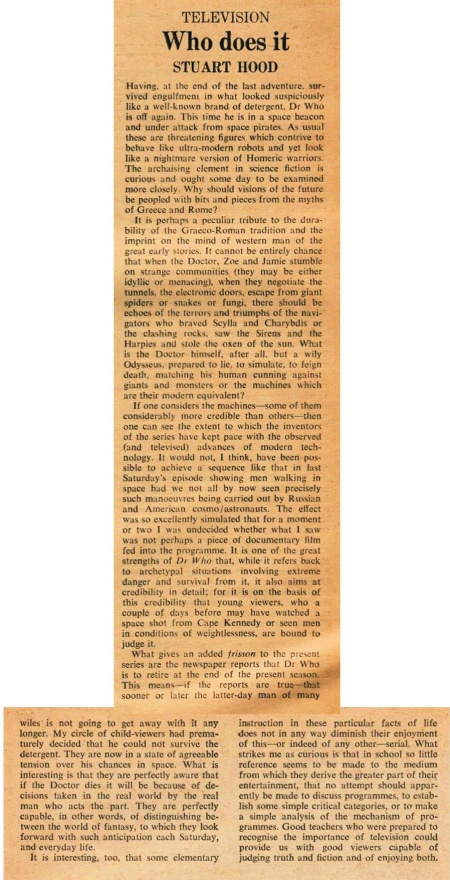 Having, at the end of the last adventure, survived engulfment in what looked suspiciously like a well-known brand of detergent. Dr Who is off again. This time he is in a space beacon and under attack from space pirates. As usual these are threatening figures which contrive to behave like ultra-modern robots and yet look like a nightmare version of Homeric warriors. The archaising clement in science fiction is curious and ought some day to be examined more closely. Why should visions of the future be peopled with bits and pieces from the myths of Greece and Rome?

It is perhaps a peculiar tribute to the durability of the Graeco-Roman tradition and the imprint on the mind of western man of the great early stories. It cannot be entirely chance' that when the Doctor, Zoe and Jamie stumble on strange communities (they may be either idyllic or menacing), when they negotiate the tunnels, the electronic doors, escape from giant spiders or snakes or fungi, there should be echoes of the terrors and triumphs of the navigators who braved Scylla and Charybdis or the clashing rocks, saw the Sirens and. the Harpies and stole the oxen of the sun, What-is the Doctor himself, after all, but a wily Odysseus, prepared to lie, to simulate, to feign death; matching his human cunning against giants and monsters or the machines which are their modern equivalent?

If one considers the machines—some of them considerably more credible than others—then one can see the extent to which the inventors of the series have kept pace with the observed (and televised) advances of modern technology. It would not, I think, have been possible to achieve a sequence like that in last Saturday's episode showing men walking in space had we not all by now seen precisely such manoeuvres being carried out by Russian and American cosmo/astronauts. The effect was so excellently simulated that for a moment or two I was undecided whether what I saw was not perhaps a piece of documentary film fed into the programme. It is one of the great strengths of Dr Who that, while• it refers hack to archetypal situations involving extreme danger and survival from it, it also aims at credibility in detail; for it is on the basis of this credibility that young viewers, who a couple of days before may have watched a space shot from Cape Kennedy or seen men in conditions of weightlessness, are bound to judge it.

What gives an added frisson to the present series are the newspaper reports that Dr Who is to retire at the end of the present season. This means—if the reports are true—that sooner or later the latter-day man of many wiles is not going to get away with it any longer. My circle of child-viewers had prematurely decided that he could not survive the detergent. They are now in a state of agreeable tension over his chances in space. What is interesting is that they are perfectly aware that if the Doctor dies it will be because of decisions taken in the real world by the real man who acts the part. They are perfectly capable, in other words, of distinguishing between the world of fantasy, to which they look forward with such anticipation each Saturday, and everyday life.

It is interesting, too, that some elementary instruction in these particular facts of life does not in any way diminish their enjoyment of this—or indeed of any other—serial. What strikes me as curious is that in school so little reference seems to be made to the medium from which they derive the greater part of their entertainment, that no attempt should apparently be made to discuss programmes, to establish some simple critical categories, or to make a simple analysis of the mechanism of programmes. Good teachers who were prepared to recognise the importance of television could provide us with good viewers capable of judging truth and fiction and of enjoying both.