Who goes back with the Master 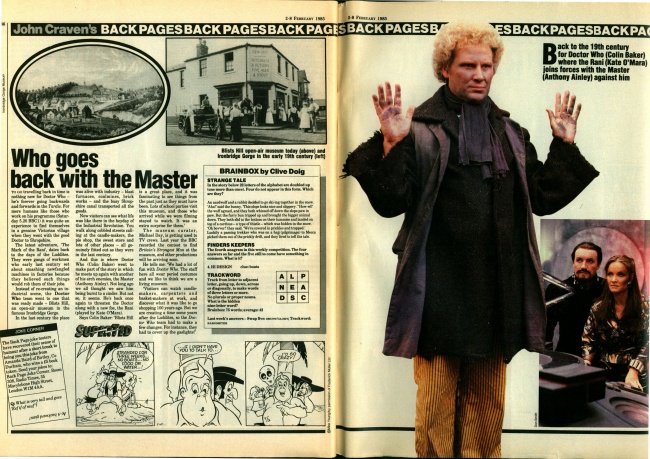 To go travelling back in time is nothing new for Doctor Who - he's forever going backwards and forwards in the Tardis. For mere humans like those who work on his programme (Saturday 5.20 BBC1) it was quite an experience to find themselves in a genuine Victorian village when they went with the good Doctor to Shropshire.

The latest adventure, 'The Mark of the Rani', dates back to the days of the Luddites. They were gangs of workmen who early last century set about smashing newfangled machines in factories because they believed such things would rob them of their jobs.

Instead of re-creating an industrial scene, the Doctor Who team went to one that was ready made - Blists Hill, an open-air museum in the famous Ironbridge Gorge.

In the last century the place was alive with industry - blast furnaces, coalmines, brick works - and the busy Shropshire canal transported all the goods.

Now visitors can see what life was like there in the heyday of the Industrial Revolution. You walk along cobbled streets calling at the candle-makers, the pie shop, the sweet store and lots of other places - all genuinely fitted out as they were in the last century.

And this is where Doctor Who (Colin Baker) went to make part of the story in which he meets up again with another of his arch enemies, the Master (Anthony Ainley). Not long ago we all thought we saw him being burnt to a cinder. But not so, it seems. He's back once again to threaten the Doctor along with a new foe, the Rani (played by Kate O'Mara).

Says Colin Baker: 'Blists Hill is a great place, and it was fascinating to see things from the past just as they must have been. Lots of school parties visit this museum, and those who arrived while we were filming stayed to watch. It was an extra surprise for them.'

The museum curator, Michael Day, is getting used to TV crews. Last year the BBC recorded the contest to find Britain's Strongest Man at the museum, and other productions will be arriving soon.

He tells me: 'We had a lot of fun with Doctor Who. The staff here all wear period costumes and we like to think we are a living museum.

'Visitors can watch candle-makers, carpenters and basket-makers at work, and discover what it was like to go shopping 100 years ago. But we are creating a time some years after the Luddites, so the Doctor Who team had to make a few changes. For instance, they had to cover up the gaslights!'