Who is Dr Who? 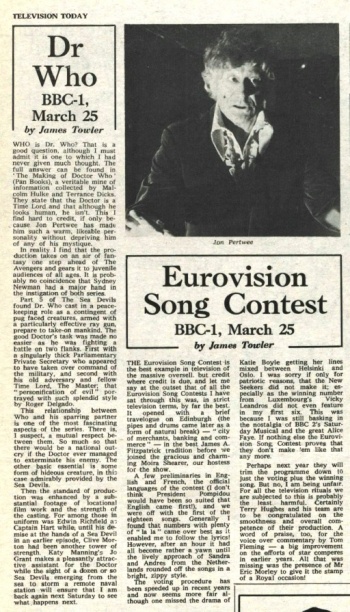 WHO is Dr. Who? That is good question, although I must admit it is one to which I have never given much thought. The full answer can be found in 'The Making of Doctor Who' (Pan Books), a veritable mine of information collected by Malcolm Hulke and Terrance Dicks. They state that the Doctor is Time Lord and that although he looks human, he isn't. This I find hard to credit, if only because Jon Pertwee has made him such a warm, likeable personality without depriving him of any of his mystique.

In really I find that the production takes on of fantasy one step ahead of The Avengers and gears it to juvenile audiences of all ages. It is probably no coincidence that Sydney Newman had a major hand in the instigation of both series.

Part 5 of The Sea Devils found Dr. Who cast in a peace-keeping role as a contingent of pug faced creatures, armed with a particularly effective ray gun, prepare to take-on mankind. The good Doctor's task was made no easier as he was fighting battle on two flanks. First with a singularly thick Parliamentary Private Secretary who appeared to have taken over command of the military, and second with his old adversary and fellow Time Lord, The Master; that "personification of evil" portrayed with such splendid style by Roger Delgado.

This relationship between Who and his sparring partner is one of the most fascinating aspects of the series There is, I suspect, a mutual respect between them. So much so that there would be a national outcry if the Doctor ever managed to exterminate his enemy. The other basic essential is form of hideous creature, in this case admirably provided by the Sea Devils.

Then the standard of production was enhanced by substantial footage of locational film work and the strength of the casting. For among those in uniform was Edwin Richfield Captain Hart while, until his mise at the hands of a Sea Devil in an earlier episode, Clive Morton had been another tower of strength. Katy Manning's Jo Grant makes a pleasantly attractive assistant for the Doctor while the sight of a dozen or so Sea Devils emerging from the sea to storm a remote naval talon will ensure that I am back again next Saturday to see what happens next.