Who is the best Doctor 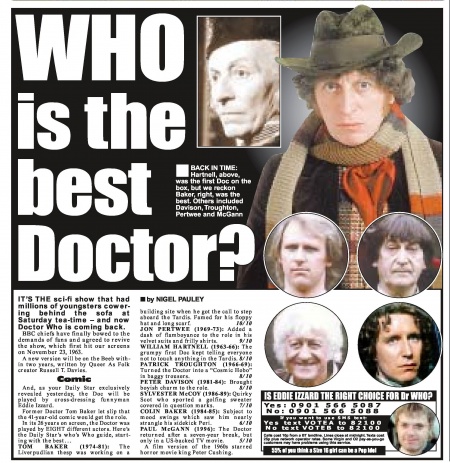 IT'S THE sci-fi show that had millions of youngsters cowering behind the sofa at Saturday tea-time — and now Doctor Who is coming back.

BBC chiefs have finally bowed to the demands of fans and agreed to revive the show, which first hit our screens on November 23, 1963.

A new version will be on the Beeb within two years, written by Queer As Folk creator Russell T. Davies.

And, as your Daily Star exclusively revealed yesterday, the Doc will be played by cross-dressing funnyman Eddie Izzard.

Former Doctor Tom Baker let slip that the 41-year-old comic would get the role. In its 26 years on screen, the Doctor was played by EIGHT different actors. Here's the Daily Star's who's Who guide, starting with the best...

TOM BAKER (1974-81): The Liverpudlian thesp was working on a building site when he got the call to step aboard the Tardis. Famed for his floppy hat and long scarf. 10/10

WILLIAM HARTNELL (1963-66): The grumpy first Doc kept telling everyone not to touch anything in the Tardis. 8/10

IS EDDIE IZZARD THE RIGHT CHOICE FOR Dr WHO?

Caption: BACK IN TIME: Hartnell, above, was the first Doc on the box, but we reckon Baker, right, was the best. Others included Davison, Troughton, Pertwee and McGann