Who is the big attraction? 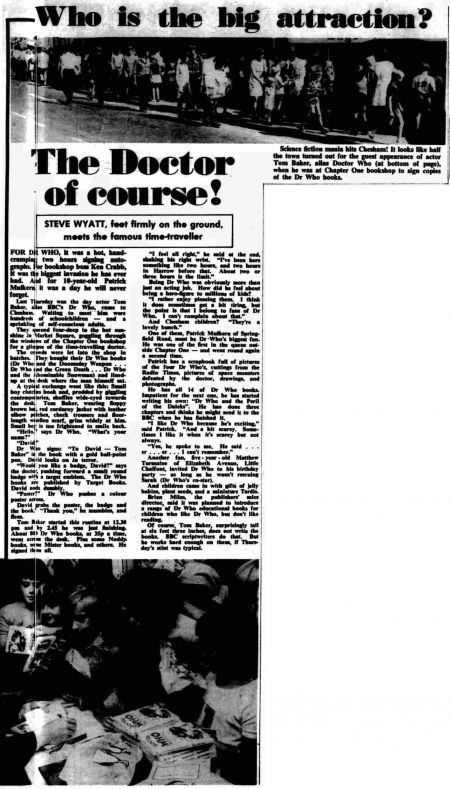 The Doctor of course!

FOR DR WHO, it was a hot, hand-cramping two hours signing autographs. For bookshop boss Ken Crabb, it was the biggest invasion he has ever had. And for 10-year-old Patrick Mulkern, it was a day be will never forget.

Last Thursday was the day actor Tom Baker, alias BBC's Dr Who, came to Chesham. Waiting to meet him were hundreds of schoolchildren and a wrinkling of self-conscious adults.

They queued four-deep in the hot sunshine in Market Square, goggling through the windows of the Chapter One bookshop for a glimpse of the time-travelling doctor.

Dr Who signs: "To David - Tom Baker" is the book with a gold ball-point pen. David looks on in terror.

"Would you like a badge, David?" says the doctor, pushing forward a small round badge with a target emblem. The Dr Who books are published by Target Books. David nods dumbly.

"Poster?" Dr Who pushes a colour poster across.

David grabs the poster, the badge and the book. "Thank you," he mumbles, and flees.

Tom Baker started this routine at 12.30 pm and by 2.45 he was just finishing. About 800 Dr Who books, at 35p a time, went across the desk. Plus some Noddy books, some Mister books, and others. He signed then all.

"I feel all right," he said at the end, shaking his right wrist. "I've been here something like two hours, and two hours in Harrow before that. About two or three hours is the limit."

Being Dr Who was obviously more than just an acting job. How did he feel about being a hero-figure to millions of kids?

"I rather enjoy pleasing them. I think it does sometimes get a bit tiring, but the point is that I belong to fans of Dr Who. I can't complain about that."

And Chesham children? "They're a lovely bunch."

One of them, Patrick Mulkern of Springfield Road, must be Dr Who's biggest fan. He was one of the first in the queue outside Chapter One and went round again a second time. Patrick has a scrapbook full of pictures of the four Dr Who's, cuttings from the Radio Times, pictures of space monsters defeated by the doctor, drawings, and photographs.

He has all 14 of Dr Who books. Impatient for the next one, he has started writing his own: "Dr Who and the Peril of the Daleks". He has done three chapters and thinks he might send it to the BBC when he has finished it.

"I like Dr Who because he's exciting," said Patrick. "And a bit scarey. Sometimes I like it when it's seamy but not always.

Another fan, five - year - old Matthew Turmaine of Elizabeth Avenue, Little Chalfont, invited Dr Who to his birthday party as long as he wasn't rescuing Sarah (Dr Who's co-star).

And children carat in with gifts of jelly babies, plant seeds, and a miniature Tardis.

Brian Miles, the publishers' sales director, said it was planned to introduce a range of Dr Who educational hooks for children who like Dr Who, but don't like reading.

Of course. Tom Baker, surprisingly tall at six feet three inches, does not write the books. BBC scriptwriters do that. But he works hard enough on them, if Thursday's stint was typical.

Caption: Science fiction mania hits Chesham! It looks like half the town turned out for guest appearance of actor Tom Baker, alias Doctor Who (at bottom of page), when he was at chapter One bookshop to sign copies of the Dr Who books.