Who says I can't be the Doctor now, asks new Time Lord Jodie 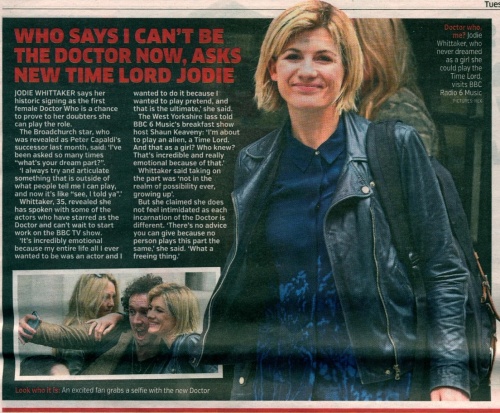 JODIE WHITTAKER says her historic signing as the first female Doctor Who is a chance to prove to her doubters she can play the role.

The Broadchurch star, who was revealed as Peter Capaldi's successor last month, said: 'I've been asked so many times "what's your dream part?".

'I always try and articulate something that is outside of what people tell me I can play, and now it's like "see, I told ya".'

Whittaker, 35, revealed she has spoken with some of the actors who have starred as the Doctor and can't wait to start work on the BBC TV show.

'It's incredibly emotional because my entire life all I ever wanted to be was an actor and I wanted to do it because I wanted to play pretend, and that is the ultimate,' she said.

The West Yorkshire lass told BBC 6 Music's breakfast show host Shaun Keaveny: 'I'm about to play an alien, a Time Lord. And that as a girl? Who knew? That's incredible and really emotional because of that.'

Whittaker said taking on the part was 'not in the realm of possibility ever, growing up'.

But she claimed she does not feel intimidated as each incarnation of the Doctor is different. 'There's no advice you can give because no person plays this part the same,' she said. 'What a freeing thing.'

Caption: An excited fan grabs a selfie with the new Doctor

Caption: Doctor who me? Jodie Whittaker, who never dreamed as a girl she could play the Time Lord, visits BBC Radio 6 Music