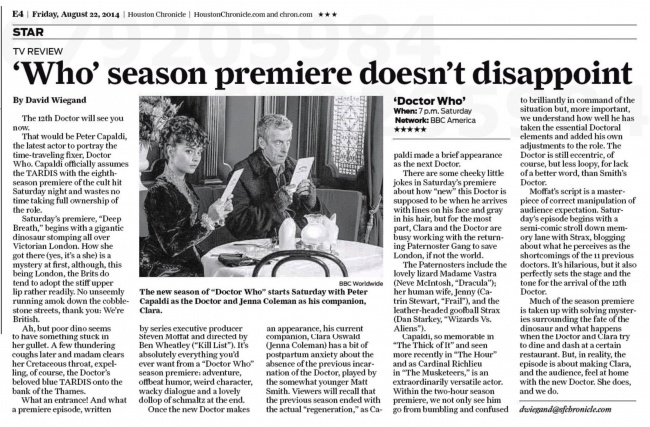 The 12th Doctor will see you now

BBC Worldwide The new season of "Doctor Who" starts Saturday with Peter Capaldi as the Doctor and Jenna Coleman as his companion, Clara.

That would be Peter Capaldi, the latest actor to portray the time-traveling fixer, Doctor Who. Capaldi officially assumes the TARDIS with the eighthseason premiere of the cult hit Saturday night and wastes no time taking full ownership of the role.

Saturday's premiere, "Deep Breath," begins with a gigantic dinosaur stomping all over Victorian London. How she got there (yes, it's a she) is a mystery at first, although, this being London, the Brits do tend to adopt the stiff upper lip rather readily. No unseemly running amok down the cobblestone streets, thank you: We're British.

Ah, but poor dino seems to have something stuck in her gullet. A few thundering coughs later and madam clears her Cretaceous throat, expelling, of course, the Doctor's beloved blue TARDIS onto the bank of the Thames.

What an entrance! And what a premiere episode, written by series executive producer Steven Moffat and directed by Ben Wheatley ("Kill List"). It's absolutely everything you'd ever want from a "Doctor Who" season premiere: adventure, offbeat humor, weird character, wacky dialogue and a lovely dollop of schmaltz at the end.

Once the new Doctor makes an appearance, his current companion, Clara Oswald ( Jenna Coleman) has a bit of postpartum anxiety about the absence of the previous incarnation of the Doctor, played by the somewhat younger Matt Smith. Viewers will recall that the previous season ended with the actual "regeneration," as Capaldi made a brief appearance as the next Doctor.

There are some cheeky little jokes in Saturday's premiere about how "new" this Doctor is supposed to be when he arrives with lines on his face and gray in his hair, but for the most part, Clara and the Doctor are busy working with the returning Paternoster Gang to save London, if not the world.

Capaldi, so memorable in "The Thick of It" and seen more recently in "The Hour" and as Cardinal Richlieu in "The Musketeers," is an extraordinarily versatile actor. Within the two-hour season premiere, we not only see him go from bumbling and confused to brilliantly in command of the situation but, more important, we understand how well he has taken the essential Doctoral elements and added his own adjustments to the role. The Doctor is still eccentric, of course, but less loopy, for lack of a better word, than Smith's Doctor.

Moffat's script is a masterpiece of correct manipulation of audience expectation. Saturday's episode begins with a semi-comic stroll down memory lane with Strax, blogging about what he perceives as the shortcomings of the 11 previous doctors. It's hilarious, but it also perfectly sets the stage and the tone for the arrival of the 12th Doctor.

Much of the season premiere is taken up with solving mysteries surrounding the fate of the dinosaur and what happens when the Doctor and Clara try to dine and dash at a certain restaurant. But, in reality, the episode is about making Clara, and the audience, feel at home with the new Doctor. She does, and we do.