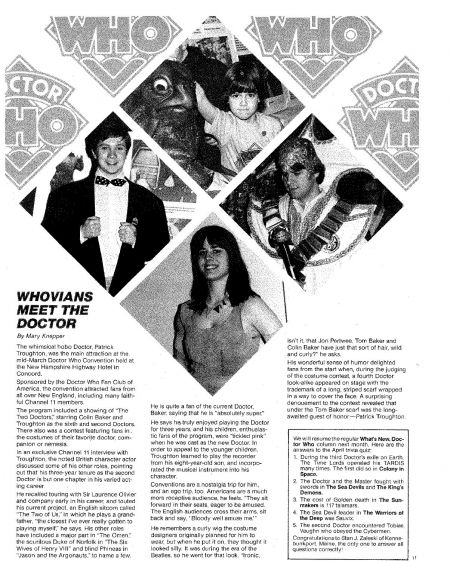 The whimsical hobo Doctor, Patrick Troughton, was the main attraction at the mid-March Doctor Who Convention held at the New Hampshire Highway Hotel in Concord.

Sponsored by the Doctor Who Fan Club of America, the convention attracted fans from all over New England, including many faithful Channel 11 members.

The program included a showing of "The Two Doctors," starring Colin Baker and Troughton as the sixth and second Doctors. There also was a contest featuring fans in, the costumes of their favorite doctor, companion or nemesis.

In an exclusive Channel 11 interview with Troughton, the noted British character actor discussed some of his other roles, pointing out that his three-year tenure as the second Doctor is but one chapter in his varied acting career.

He recalled touring with Sir Laurence Olivier and company early in his career, and touted his current project, an English sitcom called "The Two of Us," in which he plays a grandfather, "the closest I've ever really gotten to playing myself: he says. His other roles have included a major part in "The Omen," the scurilous Duke of Norfolk in 'The Six Wives of Henry VIII" and blind Phineas in "Jason and the Argonauts,' to name a few.

He is quite a fan of the current Doctor, Baker, saying that he is "absolutely super"

He says he, truly enjoyed playing the Doctor for three years, and his children, enthusiastic fans of the program, were "tickled pink" when he was cast as the new Doctor. In order to appeal to the younger children, Troughton learned to play the recorder from his eight-year-old son, and incorporated the musical instrument into his character.

Conventions are a nostalgia trip for him, and an ego trip, too. Americans are a much more receptive audience, he feels. "They sit forward in their seats, eager to be amused. The English audiences cross their arms, sit back and say, "Bloody well amuse me."

He remembers a curly wig the costume designers originally planned for him to wear, but when he put it on, they thought it looked silly. It was during the era of the Beatles. so he went for that look. "Ironic, isn't it, that Jon Pertwee, Tom Baker and Colin Baker have just that sort of hair, wild and curly?" he asks.

His wonderful sense of humor delighted fans from the start when, during the judging of the costume contest, a fourth Doctor look-alike appeared on stage with the trademark of a long, striped scarf wrapped in a way to cover the face. A surprising denouement to the contest revealed that under the Tom Baker scarf was the long-awaited guest of honor—Patrick Troughton.

We will resume the regular What's New, Doctor Who column next month. Here are the answers to the April trivia quiz:

1. During the third Doctor's exile on Earth. The Time Lords operated his TARDIS many times. The first did so in Colony in Space.

2. The Doctor and the Master fought with swords in The Sea Devils and The King's Demons.

3. The cost of Golden death in The Sun-makers is 117 talamars.

4. The Sea Devil leader in The Warriors of the Deep was Sauvix.

5. The second Doctor encountered Tobias, Vaughn Who obeyed the Cybermen.

Congratulations to Stan J. Zaleski of Kennebunkport, Maine, the only one to answer all questions correctly!