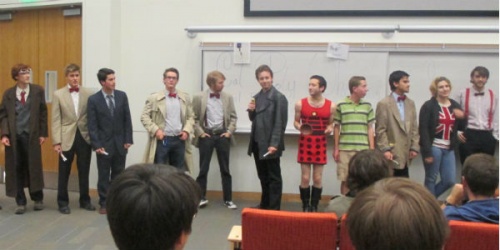 It’s a Saturday night, yet dozens of Cal Poly students are gathered in and around the new Warren J. Baker Center for Science and Mathematics on campus. Many of them are wearing bow ties, 12-foot-long scarves or stalks of celery pinned to their clothes. Outside, there is a long table piled with food such as Jammie Dodgers and fish fingers with custard, while inside a playlist of classic rock songs blares from the speakers of a lecture hall.

The Whovians have arrived.

“It’s infectious,” English junior Megan Voss said, founder and president of the Cal Poly Whovians club. “When you become a fan of Doctor Who, it becomes your mission to convert as many people as possible.”

Doctor Who, which airs on the BBC, is the longest-running science fiction show on television. Saturday marked the 50th anniversary of the first episode’s air date, so Doctor Who fans — more commonly known as Whovians — around the world tuned in to the special anniversary episode. The anniversary episode was broadcast on TV simultaneously in more than 75 countries and played in several theaters and could be watched in 3-D, assuming one had access to the right kind of screen.

The show revolves around a time-traveling alien known simply as “the Doctor.” The plot varies greatly across episodes, with the Doctor doing everything from fighting fellow aliens on other planets in the future, to hanging out with William Shakespeare in 16th century England. He also makes frequent visits to our modern era, where he usually picks up a human companion or two to travel with him.

“I wasn’t allowed to watch sci-fi or fantasy because my parents weren’t into that,” Voss said, who was introduced to Doctor Who in her junior year of high school, “but then when I saw it, I was like, ‘This is the greatest thing I’ve ever seen!’”

Voss’ love for the show continued upon her arrival at Cal Poly, where she said Doctor Who helped her make most of her friends.

“Someone in the class of 2015 made a Facebook page for Cal Poly Doctor Who fans,” she said, explaining the origins of the Cal Poly Whovians club. “It just kind of took over.”

Those who had “liked” the Facebook page began to communicate and meet up in real life to watch episodes together, until they realized what they were doing had gone far beyond a few Whovian friends hanging out together.

“We tried to shove 45 people into one PCV apartment,” computer engineering junior AJ Fite said, who is both Voss’s boyfriend and the club’s “Cyberman” — a reference to one of the monsters The Doctor frequently fights, and in this context meaning that he is the officer in charge of anything technical. “I had to stand on the stove to take a picture.”

Today, the group is an official club recognized by Associated Students, Inc. , but practicality was not the only motivation for formalizing it.

“The main driving force was that it made me feel like I have a home,” Voss said. “It helped me transition from high school to college.”

Convincing ASI to get on board with the idea wasn’t easy, however.

“The guy who decides which clubs to approve was hesitant,” Voss said. “We already had the Bronies, so he was kinda like, where are the lines drawn? He didn’t want all these clubs about shows.”

Fortunately, Voss and her friends were able to convince him by citing the show’s rich history, as well as the overwhelmingly large amount of support for the idea from members of the Facebook page. Since then, the club has grown mostly thanks to word of mouth, and even had its own display on the second floor of Robert E. Kennedy Library for a couple of weeks last year. Voss said they printed paper flyers for the first time just for the 50th anniversary, although they weren’t trying very hard to draw in newcomers for that particular event.

“It’d be a little awkward to advertise,” club treasurer computer science junior Grant Pickett said prior to the event. “It’s not very newbie friendly. It’ll be harder to convince people to jump on at that point. The 50th is kinda fan-servicey … It could arguably spoil everything up until that point.”

Despite the apparent lack of advertising, there were several dozen people in attendance. After a few minutes of socializing with each other and devouring all the food, the Whovians made themselves comfy in Baker Science’s room 101, sitting in plush stadium seating as Fite queued up the episode on the massive screen in the front of the room.

The viewing party was kicked off with “The Night of the Doctor,” a minisode and prequel to the 50th anniversary special. Part of the reason Doctor Who has been able to stay on the air for so long is because of the Doctor’s ability to regenerate. Time Lords, the alien species to which the Doctor belongs, change bodies when fatally wounded instead of dying, which allows them to live for a theoretically infinite amount of time. Twelve actors have portrayed the Doctor so far; the 13th will take over during this year’s Christmas episode.

After the 50th anniversary special ended, it was time for the costume contest. All the cosplayers in attendance came to the front of the room, and the club officers chose a winner based on audience applause.

The victor, computer science senior David Berlin, came holding a plunger and whisk and wearing a spandex dress made to look like a Dalek, the Doctor’s most iconic foe. The prize for his daring was a stuffed, noise-making TARDIS (Time And Relative Dimension In Space), the Doctor’s time machine, spaceship and home.

“I feel kind of bad,” Berlin said. “Other people really put effort into their costumes, and I just put on a dress.”

Even after the party concluded, most people remained for a little while longer just to socialize.

“That’s my favorite part,” Voss said. “Seeing people make friends … I want people to be part of the club rather than a member of the club.”

Not only have friendships been forged thanks to the Cal Poly Whovians, but romantic relationships as well, including Voss and Fite’s. The Facebook page that started it all, adorned with all sorts of Doctor Who-related news, discussions and fan art, reached more than 200 “likes” this month, illustrating approximately how many lives this show has touched on our campus.

“We all just get to share our love of it,” Voss said.

Caption: The winner of the costume contest was David Berlin, the fifth from the right in the red Dalek outfit.