Why John had to be put down 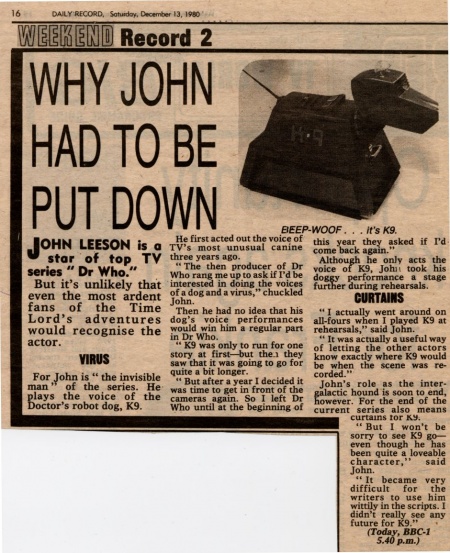 JOHN LEESON is a star of top TV series "Dr Who."

But it's unlikely that even the most ardent fans of the Time Lord's adventures would recognise the actor.

For John is "the invisible man " of the series. He plays the voice of the Doctor's robot dog, K9.

He first acted out the voice of TV's most unusual canine three years ago.

"The then producer of Dr Who rang me up to ask if I'd be interested in doing the voices of a dog and a virus," chuckled John.

Then he had no idea that his dog's voice performances would win him a regular part in Dr Who.

"K9 was only to run for one story at first—but then they saw that it was going to go for quite a bit longer.

"But after a year I decided it was time to get in front of the cameras again. So I left Dr Who until at the beginning of this year they asked if I'd come back again."

Although he only acts the voice of K9, John took his doggy performance a stage further during rehearsals.

"I actually went around on all-fours when I played K9 at rehearsals," said John.

"It was actually a useful way of letting the other actors know exactly where K9 would be when the scene was recorded."

John's role as the intergalactic hound is soon to end, however. For the end of the current series also means curtains for K9.

"But I won't be sorry to see K9 go—even though he has been quite a loveable character," said John.

"It became very difficult for the writers to use him wittily in the scripts. I didn't really see any future for K9." (Today, BBC-1 5.40 p.m.)