Why can't they write for women? 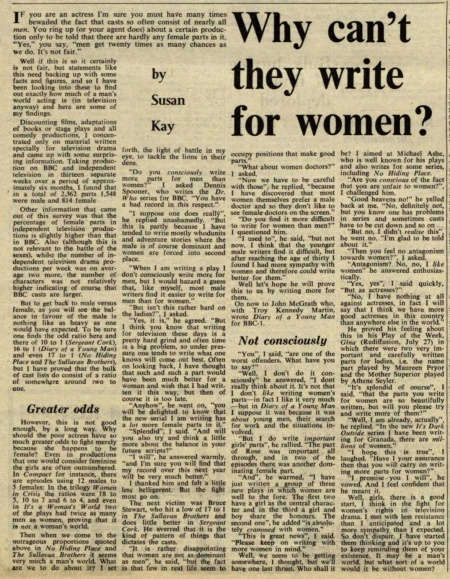 IF you are an actress I'm sure you must have many times bewailed the fact that casts so often consist of nearly all men. You ring up for your agent does) about a certain production only to be told that there are hardly any female parts in it. "Yes," you say, "men get twenty times as many chances as we do. It's not fair."

Well if this is so it certainly is not fair, but statements like this need backing up with some facts and figures, and so I have been looking into these to find out exactly how much of a man's world acting is (in television anyway) and here are some of niy findings.

Discounting films, adaptations of books or stage plays and all comedy productions, I concentrated only on material written specially for television drama and came up with some surprising information. Taking production on BBC and independent television in thirteen separate weeks over a period of approximately six months. I found that in a total of 2,362 parts 1.548 were male and 814 female

Other information that came out of this survey was that the percentage of female parts in independent television productions is slightly higher than that in BBC. Also (although this is not relevant to the battle of the sexes). whilst the number of independent television drama productions per week was on average two more, the number of characters was not relatively higher indicating of course that BBC casts are larger.

But to get back to male versus female, as you will see the balance in favour of the male is nothing like as heavy as one would have expected. To be sure one finds the odd ratio here and there of 10 to 1 (Sergeant Cork). 16 to 1 (Diary of a Young Man) and even 17 to 1 (No Hiding Place and The Sullavan Brothers), but I have proved that the bulk of cast lists do consist of a ratio of somewhere around two to one.

However, this is not good enough, by a long way. Why should the poor actress have so much greater odds to fight merely because she happens to be female? Even in productions that one would consider feminine the girls are often outnumbered. In Compact for instance, there are episodes using 12 males to 5 females: In the trilogy Women in Crisis the ratios were 18 to 5, 10 to 7 and 6 to 4, and even in les a Woman's World two of the plays had twice as many men as women, proving that it is not a woman's world.

Then when we come to the outrageous proportions quoted above in No Hiding Place and The Sullavan Brothers it seems very much a man's world. What are we to do about it? I set forth, the light of battle in my eye, to tackle the lions in their dens.

"Do you consciously write more parts for men than women?" I asked Dennis Spooner, who writes the Dr. Who series for BBC. "You have a bad record in this respect"

"I suppose one does really", he replied unashamedly. "But this is partly because I have tended to write mostly whodunits and adventure stories where the male is of course dominant and women are forced into second place.

"When I am writing a play I don't consciously write more for men, but I would hazard a guess that, like myself, most male writers find it easier to write for men than for women."

"But isn't this rather hard on the ladies?", I asked.

"Yes, it is," he agreed. "But I think you know that writing for television these days is a pretty hard grind and often time is a big problem, so under pressure one tends to write what one knows will come out best. Often on looking back, I have thought that such and such a part would have been much better for a woman and wish that I had written it this way, but then of course it is too late.

"Anyhow", he went on, "you will be delighted to know that the new serial I am writing has a lot more female parts in ii"

"Splendid", I said. "And will you also try and think a little more about the balance in your future scripts?"

"I will", he answered warmly, "and I'm sure you will find that my record over this next year will be very much better."

I thanked him and felt a little less belligerent. But the fight must go on.

The next victim was Bruce Stewart, who hit a low of 17 to I in The Sullavan Brothers and does little better in Sergeant Cork. He averred that it is the kind of pattern of things that dictates the casts.

it is rather disappointing that women are not as dominant as men", he said, "but the fact is that few in real life seem to occupy positions that make good parts."

"What about women doctors?" i asked.

"Now we have to be careful with those", he replied. "because 1 have discovered that most women themselves prefer a male doctor and so they don't like to see female doctors on the screen."

"Do you find it more difficult to write for women than men?" I questioned him.

I used to", he said, "but not now. I think that the younger male writers find it difficult, but after reaching the age of thirty I found i had more sympathy with women and therefore could write better for them."

Well let's hope he will prove this to us by writing more for them.

On now to John McGrath who, with Troy Kennedy Martin, wrote Diary of a Young Man for BBC-1.

"You", I said, "are one of the worst offenders. What have you to say?"

"Well, I don't do it consciously" he answered, "I don't really think about it. It's not that I don't like writing women's parts—in fact I like it very much —but in Diary of a Young Man I suppose it was because it was about young men, their search for work and the situations involved.

'But I do write important girls' parts", he rallied. "The part of Rose was important all through, and in two of the episodes there was another dominating female part.

"And", he warmed, "I have just written a group of three new plays in which women are well to the fore. The first two have a girl as the central character and in the third a girl and boy share the honours. The second one", he added "is absolutely crammed with women."

"This is great news", I said. "Please keep on writing with more women in mind."

Well, we seem to be getting I thought, but we'll one last thrust. Who shall it be? I aimed at Michael Ashe, who is well known for his plays and also writes for some series, including No Hiding Place.

"Are you conscious of the fact that you are unfair to women?", I challenged him.

"Good heavens no!" he yelled back at me. "No, definitely not, but you know one has problems in series and sometimes casts have to be cut down and so on ...

"Then you feel no antagonism towards women?", I asked.

"Antagonism? No, no, I like women" he answered enthusiastically.

"No, I have nothing at all against actresses, in fact I will say that 1 think we have more good actresses in this country, than anywhere else in the world.'

He proved his feeling about this in his Play of the Week, Gina (Rediffusion, July 27) in which there were two very important and carefully written parts for ladies, i.e. the name part played by Maureen Pryor and the Mother Superior played by Athene Seyler.

"It's splendid of course", 1 said, "that the parts you write for women are so beautifully written, but will you please try and write more of them?"

"Well, I am already, actually", he replied. "in the new It's Dark Outside series I have been writing for Granada, there are millions of women."

"I hope this is true", f laughed. Have i your assurance then that you will carry on writing more parts for women?" 1romise you I will", he vowed. And 1 feel confident that he meant it.

Well, girls, there is a good start, 1 think in the fight for women's rights in television drama. I met with less resistance than I anticipated and a lot more sympathy than I expected. So don't dispair. I have started them thinking and it's up to you to keep reminding them of your existence. It may be a man's world, but what sort of a world would it be without women?