Why we should all be under the Doctor 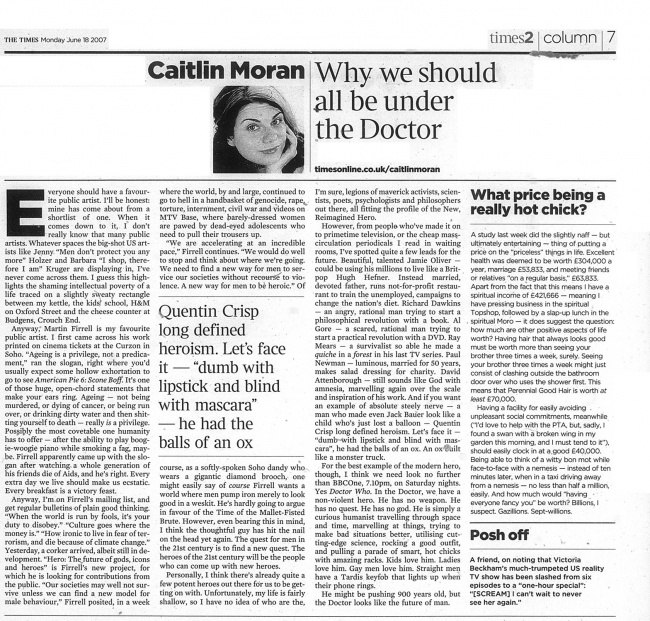 Everyone should have a favourite public artist. I'll be honest: mine has come about from a shortlist of one. When it comes down to it, I don't really know that many public artists. Whatever spaces the big-shot US artists like Jenny "Men don't protect you any more" Holzer and Barbara "I shop, therefore I am" Kruger are displaying in, I've never come across them. I guess this highlights the shaming intellectual poverty of a life traced on a slightly sweaty rectangle between my kettle, the kids' school, H&M on Oxford Street and the cheese counter at Budgens, Crouch End.

Anyway, Martin Firrell is my favourite public artist. I first came across his work printed on cinema tickets at the Curzon in Soho. "Ageing is a privilege, not a predicament," ran the slogan, right where you'd usually expect some hollow exhortation to go to see American Pie 6: Scone Boff It's one of those huge, open-chord statements that make your ears ring. Ageing — not being murdered, or dying of cancer, or being run over, or drinking dirty water and then shitting yourself to death — really is a privilege. Possibly the most covetable one humanity has to offer — after the ability to play boogie-woogie piano while smoking a fag, maybe. Firrell apparently came up with the slogan after watching a whole generation of his friends die of Aids, and he's right. Every extra day we live should make us ecstatic. Every breakfast is a victory feast.

Anyway, I'm on Firrell's mailing list, and get regular bulletins of plain good thinking. "When the world is run by fools, it's your duty to disobey." "Culture goes where the money is." "How ironic to live in fear of terrorism, and die because of climate change." Yesterday, a corker arrived, albeit still in development. "Hero: The future of gods, icons and heroes" is Firrell's new project, for which he is looking for contributions from the public. "Our societies may well not survive unless we can find a new model for male behaviour," Firrell posited, in a week where the world, by and large, continued to go to hell in a handbasket of genocide, rape,_ torture, internment, civil war and videos on MTV Base, where barely-dressed women are pawed by dead-eyed adolescents who need to pull their trousers up.

"We are accelerating at an incredible pace," Firrell continues. "We would do well to stop and think about where we're going. We need to find a new way for men to service our societies without recours to violence. A new way for men to be heroic." Of course, as a softly-spoken Soho dandy who wears a gigantic diamond brooch, one might easily say of course Firrell wants a world where men pump iron merely to look good in a weskit. He's hardly going to argue in favour of the Time of the Mallet-Fisted Brute. However, even bearing this in mind, I think the thoughtful guy has hit the nail on the head yet again. The quest for men in the 21st century is to find a new quest. The heroes of the 21st century will be the people who can come up with new heroes.

Personally, I think there's already quite a few potent heroes out there for us to be getting on with. Unfortunately, my life is fairly shallow, so I have no idea of who are the I'm sure, legions of maverick activists, scientists, poets, psychologists and philosophers out there, all fitting the profile of the New, Reimagined Hero.

However, from people who've made it on to primetime television, or the cheap mass-circulation periodicals I read in waiting rooms, I've spotted quite a few leads for the future. Beautiful, talented Jamie Oliver —could be using his millions to live like a Brit-pop Hugh Hefner. Instead married, devoted father, runs not-for-profit restaurant to train the unemployed, campaigns to change the nation's diet. Richard Dawkins — an angry, rational man trying to start a philosophical revolution with a book. Al Gore — a scared, rational man trying to start a practical revolution with a DVD. Ray Mears — a survivalist so able he made a quiche in a forest in his last TV series. Paul Newman — luminous, married for 50 years, makes salad dressing for charity. David Attenborough — still sounds like God with amnesia, marvelling again over the scale and inspiration of his work. And if you want an example of absolute steely nerve — a man who made even Jack Bauer look like a child who's just lost a balloon — Quentin Crisp long defined heroism. Let's face it —"dumb with lipstick and blind with mascara", he had the balls of an ox. An ox built like a monster truck.

For the best example of the modern hero, though, I think we need look no further than BBC One, 7.10pm, on Saturday nights. Yes Doctor Who. In the Doctor, we have a non-violent hero. He has no weapon. He has no quest. He has no god. He is simply a curious humanist travelling through space and time, marvelling at things, trying to make bad situations better, utilising cutting-edge science, rocking a good outfit, and pulling a parade of smart, hot chicks with amazing racks. Kids love him. Ladies love him. Gay men love him. Straight men have a Tardis keyfob that lights up when their phone rings.