William Hartnell's Granddaughter On The First Doctor Who 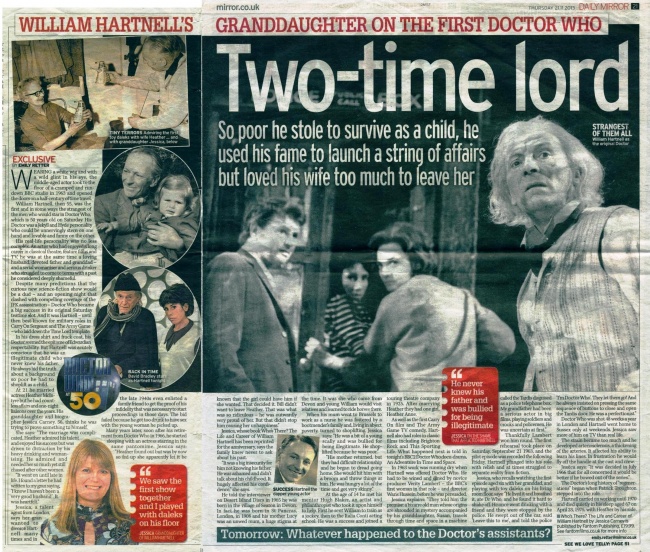 WEARING a white wig and with a wild glint in his eye, the middle-aged actor took to the floor of a cramped and rundown BBC studio in 1963 and opened the doors on a half-century of time travel.

William Hartnell, then 55, was the first and in some ways the strangest of the men who would star in Doctor Who, which is 50 years old on Saturday. His Doctor was a Jekyll and Hyde personality who could be unnervingly stern on one hand and lovable and funny on the other.

His real-life personality was no less complex. An actor who had enjoyed a long career in classical theatre, feature films and TV, he was at the same time a loving husband, devoted father and granddad - and a serial womaniser and serious drinker who struggled to come to terms with a past he considered deeply shameful.

Despite many predictions that the curious new science-fiction show would be a dud - and an opening night that clashed with compelling coverage of the JFK assassination - Doctor Who became a big success in its original Saturday teatime slot. And it was Hartnell - until then best-known for military roles in Carry On Sergeant and The Army Game - who laid down the Time Lord template.

In his dress shirt and frock coat, his Doctor seemed the epitome of Edwardian respectability But Hartnell was acutely conscious that he was an illegitimate child who never knew his father. He always hid the truth about a background so poor he had to shoplift as a child.

At 21 he married actress Heather McIntyre but he had countless affairs and one-night liaisons over the years. His granddaughter and biographer Jessica Carney, 56, thinks he was trying to prove something to himself.

She says: "The marriage was complicated. Heather admired his talent and enjoyed his success but was driven to distraction by his heavy drinking and womanising. He admired and needed her so much yet still chased after other women.

"It went on until late in life. I found a letter he had written to my gran saying, 'I know I haven't been a very good husband'. It was heartfelt."

Jessica, a talent agent from London, says her gran wanted to divorce Hartnell many times and in the late 1940s even enlisted a family friend to get the proof of his infidelity that was necessary to start proceedings in those days. The bid failed because he got too drunk to have sex with the young woman he picked up.

Many years later, soon after his retirement from Doctor Who in 1966, he started sleeping with an actress starring in the same pantomime. Jessica says: "Heather found out but was by now so fed up she apparently let it be known that the girl could have him if she wanted. That decided it. Bill didn't want to leave Heather. That was what was so ridiculous - he was outwardly very proud of her. But that didn't stop him causing her unhappiness."

Jessica, whose book Who's There? The Life and Career of William Hartnell has been reprinted for the anniversary, says the family knew never to ask about his past.

"It was a big insecurity for him not knowing his father. He was ashamed and didn't talk about his childhood. It hugely affected his confidence, she says.

He told the interviewer on Desert Island Discs in 1965 he was born in the village of Seaton in Devon. In fact he was born in St Pancras, London, in 1908 and his mother Lucy was an unwed mum, a huge stigma at the time. It was she who came from Devon and young William would visit relatives and learned to ride horses there.

When his mum went to Brussels to work as a nurse he was fostered by bootmender's family and, living in abject poverty, turned to shoplifting. Jessica says: "He was a bit of a young scally and was bullied for being illegitimate. He shoplifted because he was poor.

"His mother returned, but they had difficult relationship and he began to dread going home. She would hit him with a broom and throw things at him. He was hungry a lot of the time and got very skinny"

At the age of 14 he met his mentor Hugh Blaker, an artist and philanthropist who took it upon himself to help. First he sent William to train as a jockey, then to the Italia Conti acting it school. He was a success and joined a touring theatre company in 1925. After marrying Heather they had one girl, Heather Anne.

As well as the first Carry On film and The- Army Game TV comedy, Hartnell also had roles in classic films including Brighton Rock and This Sporting Life. What happened next is told in tonight's BBC2 Doctor Who docu-drama, An Adventure In Time and Space.

In 1963 work was running dry when Hartnell was offered Doctor Who. He had to be wined and ,dined by novice producer Verity Lambert - the BBC's first woman in that role - and director Waris Hussein, before he was persuaded.

Jessica explains: "They told him the premise: a bizarre old man whose origins are shrouded in mystery accompanied by his granddaughter, Susan, travels through time and space in a machine called the Tardis disguised as a police telephone box. My grandfather had been a serious actor in big films, playing soldiers and crooks and policemen. He was uncertain at first."

Thankfully Lambert won him round. The first rehearsal took place on Saturday, September 21 1963, and the pilot episode was recorded the following Friday. Hartnell plunged into his role with relish and at times struggled to separate reality from fiction.

Jessica, who recalls watching the first episode aged six with her granddad, and playing with toy daleks on his living room floor, says: "He lived it and breathed it, ate Dr Who, and he found it hard to shake off. He once went drinking with a friend and they were stopped by the police. He swept out of the car, said leave this to me, and told the police 'I'm Doctor Who.' They let them go! And he always insisted on pressing the same sequence of buttons to close and open the Tardis door. He was a perfectionist.

Doctor Who was shot 48 weeks a year in London and Hartnell went home to Sussex only at weekends. Jessica saw more of him on TV than real life.

The strain became too much and he developed arteriosclerosis, a thickening of the arteries. It affected his ability to learn his lines. In frustration he would fly off the handle at the cast and crew.

Jessica says: "It was decided in July 1966 that for all concerned it would be better if he bowed out of the series."

The Doctor's long history of "regenerations" began when Patrick Troughton stepped into the role.

Who's There? The Life and Career of William Hartnell by Jessica Carney is published by Fantom Publishing, £19.99. See fantomfilms.co.uk for more info

Tomorrow: Whatever happened to the Doctor's assistants?

Caption: TINY TERRORS Admiring the first toy daleks with wife Heather ... and with granddaughter Jessica, below

Caption: BACK IN TIME David Bradley stars as Hartnell tonight