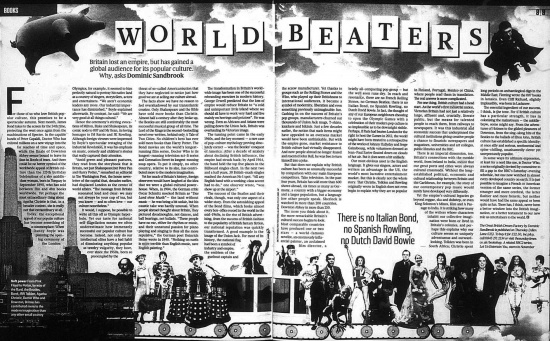 Britain lost an empire, but has gained a global audience for its popular culture. Why, asks Dominic Sandbrook

For those of us who love British popular culture, this promises to be a spectacular autumn. Next month, James Bond takes to the screen for the 24th time, protecting the west once again from the machinations of Spectre. In the capable hands of Peter Capaldi, Doctor Who has enlisted millions on a new voyage into the far reaches of time and space, while the finale of Downton Abbey seems bound to leave its fans in floods of tears. And there could be no better symbol of the worldwide appeal of British culture than the 125th birthday celebrations of a shy middleclass woman, born in Torquay in September 1890, who has sold between 2bn and 4bn books worldwide. Yet perhaps the most extraordinary thing about Agatha Christie is that, in a broader context, she is really not that extraordinary at all.

Today, the exceptional appeal of our popular culture has become something of a commonplace. When Danny Boyle was planning the opening ceremony of the London Olympics, for example, it seemed to him perfectly natural to portray his native land as a country of singers, storytellers, actors and entertainers. "We aren't economic leaders any more. Our industrial importance has diminished," Boyle explained afterwards. By contrast, he said: "We are very good at all things cultural."

Hence the ceremony's stirring evocations of Milton, Blake and Shakespeare, its comic nods to 007 and Mr Bean, its loving homages to JM Barrie and JK Rowling. Although foreign viewers were impressed by Boyle's spectacular restaging of the Industrial Revolution, it was his emphasis on music, comedy and children's stories that really captured their attention.

"Amid green and pleasant pastures, they read from the storybook that is Britain, not just Shakespeare but Peter Pan and Harry Potter," remarked an editorial in The Washington Post, the house newsletter of the capital that, decades earlier, had displaced London as the centre of world affairs. "The message from Britain resonated loud and clear: we may not always be your cup of tea, but you know -- and so often love -- our culture nonetheless."

It would, I suppose, be possible to write all this off as Olympic hyperbole. Yet our taste for national self-flagellation means we often underestimate how immensely successful our popular culture has become. Indeed, not only do our intellectual elites have a bad habit of dismissing anything popular as tawdry vulgarity, they have, ever since the 1950s, been so preoccupied by the threat of so-called Americanisation that they have neglected to notice just how good we are at selling our culture abroad.

The facts show we have no reason to feel overshadowed by our transatlantic cousins. Only Shakespeare and the Bible have sold more books than Christie. Almost half a century after they broke up, the Beatles are still comfortably the most successful musical group of all time. The Lord of the Rings is the second-bestselling novel ever written, behind only A Tale of Two Cities. No children's hero has ever sold more books than Harry Potter. The Bond movies are the world's longestrunning film series, Doctor Who is its longest-running television sci-fi series and Coronation Street its longest-running soap opera. To put it simply, no other country, relative to its size, has contributed more to the modern imagination. Yet for much of Britain's history, foreign observers would have laughed at the idea that we were a global cultural powerhouse. When, in 1904, the German critic Oscar Schmitz mocked Britain as "Das Land ohne Musik"-- the land without music -- he was being a bit unfair, but his caustic take was hardly unusual. When people abroad thought about Britain, they pictured dreadnoughts, not dances, and ball bearings, not ballads. "These people have no ear, either for rhythm or music, and their unnatural passion for piano playing and singing is thus all the more repulsive," the German poet Heinrich Heine wrote in 1840. "Nothing on earth is more terrible than English music, save English painting."

The transformation in Britain's worldwide image has been one of the successful rebranding exercises in modern history. George Orwell predicted that the loss of empire would reduce Britain to "a cold and unimportant little island where we should all have to work very hard and live mainly on herrings and potatoes". He was wrong. Even as Africans and Asians were pulling down the Union Jack, Britain was overhauling its Victorian image.

The turning point came in the early 1960s, and the key moment -- a rare case of pop-culture mythology proving absolutely correct -- was the Beatles' conquest of America. After a decade of anxiety about declining British influence, the empire had struck back; by April 1964, the band held the top five places in the Billboard singles chart. In the next two and a half years, 30 British-made singles reached the American No 1 spot. "All any English band with a working-class accent had to do," one observer wrote, "was show up at the airport."

The success of the Beatles and their rivals, though, was only one aspect of a wider story. From the astonishing appeal of the Bond films, which broke almost every box-office record in the world in the mid-1960s, to the rise of British advertising, from the success of British fashion to the popularity of British fantasy fiction, our national reputation was quickly transformed. A good example is the image of the Union Jack. For most of its history, the national flag had been a symbol of industry and empire, the emblem of the gunboat captain and the screw manufacturer. Yet thanks to groups such as the Rolling Stones and the Who, who played up their Britishness to international audiences, it became a symbol of modernity, liberation and even something previously unimaginable: fun. Cashing in on the success of Britain's pop groups, manufacturers churned out thousands of Union Jack mugs, T-shirts, knickers and bikinis. Just a few decades earlier, the notion that such items might have appealed to an overseas market would have been unthinkable. But with the empire gone, market resistance to British culture had virtually disappeared. And now people abroad no longer feared and resented John Bull, he was free to turn himself into a joke.

But that does not explain why British culture has been so unusually successful by comparison with our main European competitors. Take television. In the past four years, Britain has sold more than 600 shows abroad, six times as many as Germany, a country with a bigger economy and a larger population, but a language few other people speak. Sherlock is watched in more than 200 countries, Downton Abbey in more than 250.

The more you think about it, the more remarkable Britain's cultural success begins to look. Most comparable countries have produced one or two stars -- a world-famous novelist, an enormously influential painter, an acclaimed film director, a briefly all-conquering pop group -- but the well soon runs dry. In reach and resonance, there are no French Rolling Stones, no German Beatles; there is no Italian Bond, no Spanish Rowling, no Dutch David Bowie. In fact, the thought of any of our European neighbours choosing to open the Olympic Games with a celebration of their modern pop culture is so implausible as to be downright risible. Perhaps, if Paris had beaten London for the right to host the Games in 2012, the world might have been treated to a retrospective of the works of Johnny Hallyday and Serge Gainsbourg, while volunteers dressed as Jean-Paul Sartre floated down on clouds of hot air. But it does seem a bit unlikely.

Our most obvious asset is the English language. It gives our singers, actors and writers an advantage in the US, the world's most lucrative entertainment market. But this is clearly not the whole story. That Christie, Tolkien and Rowling originally wrote in English does not even begin to explain why they are so popular in Finland, Portugal, Mexico or China, where people read them in translation. The real answer is more complicated.

For one thing, British culture had a head start. As the world's first industrial nation, Victorian Britain had not just a relatively large, affluent and, crucially, literate public, but the means for talented people to reach them, from railways to newspapers. It was this industrial and economic success that underpinned the cultural institutions giving creative people a chance to flourish: newspapers and magazines, universities and art colleges, public libraries and the BBC.

There is an imperial dimension, too. Britain's connections with the outside world, from Ireland to India, meant that our great ports and cities were always cultural crossroads. Without the longestablished political, economic and cultural relationship between Britain and the Caribbean, for example, the story of our contemporary pop music would surely have developed very differently.

Yet the empire's cultural legacies go beyond reggae, ska and dubstep, or even King Solomon's Mines, Kim and A Passage to India. It is striking how many of the writers whose characters inhabit our collective imagination were born or lived in Britain's colonies, and perhaps this explains why our culture seems so uniquely adventurous and outwardlooking. Tolkien was born in South Africa; Christie spent looking.

long periods on archaeological digs in the Middle East; Fleming wrote the 007 books in Jamaica. Even Cliff Richard, slightly implausibly, was born in Lucknow.

The essential ingredient of our success, I think, is the tone. For if British culture has a particular strength, it lies in colonising the mainstream -- the middlebrow, some might say. From the adventures of Holmes to the gilded pleasures of Downton, from the sing-along hits of the Beatles to the ballads of Elton John, British culture has established a specific identity: at once silly and serious, sentimental and spine-chilling, unashamedly clever yet unrepentantly populist.

In some ways its ultimate expression, at least for a nerd like me, is Doctor Who, a series originally devised by committee to fill a gap in the BBC's Saturday-evening schedule, but one now watched in almost every developed country on earth. It is just possible to imagine a French or American version of the same series, the former stranger and more cerebral, the latter flashier and more frenetic, but neither would have had the same appeal or been quite as fun. There has, I think, never been a better window into the British imagination, or a better testament to our new role as entertainers to the world. c The Great British Dream Factory by Dominic Sandbrook is published on Thursday (Allen Lane £25).

There is no Italian Bond, no Spanish Rowling, no Dutch David Bowie

Caption: Soft power From Pink Floyd to Potter, by way of the Bard, the Beatles, Bond, JRR Tolkien, Agatha Christie, Doctor Who and Downton, Britain has contributed more to the modern imagination than any other small country; GETTY IMAGES, REX FEATURES, ALLSTAR, ITV, LFI, BBC, AP