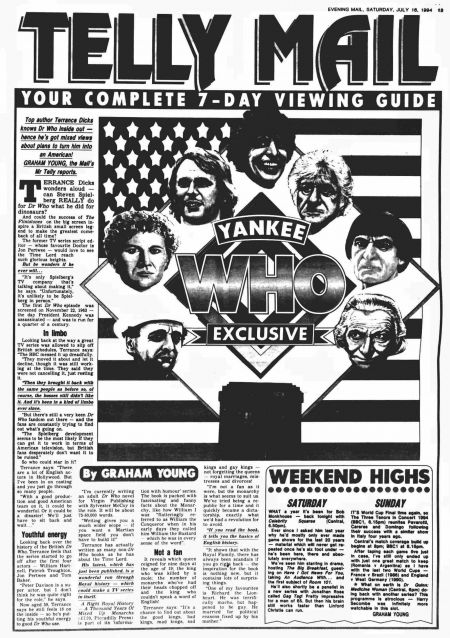 Top author Terrance Dicks knows Dr Who Inside out —hence he's got mixed views about plans to turn him into an American! GRAHAM YOUNG, the Mail's Mr Telly reports.

TERRANCE Dicks wonders aloud — can Steven Spielberg REALLY do for Dr Who what he did for dinosaurs?

And could the success of The Flintstones on the big screen inspire a British small screen leg. end to make the greatest comeback of all time?

The former TV series script editor — whose favourite Doctor is Jon Pertwee — would love to see the Time Lord reach such glorious heights.

Rut he wanders if he ever will...

"It's only Spielberg's TV company that's talking about making it," he says. "Unfortunately, it's unlikely to be Spielberg in person."

The first Dr Who episode wan screened on November 22, 1983 —the day President Kennedy was assassinated — and was to run for a quarter of a century.

Looking back at the way a great TV series was allowed to slip off British schedules, Terrance says: "The BBC messed it up dreadfully.

"They moved it about and let it decline. though It woo still working at the time. They said they were not cancelling it, just resting it.

"Then they brought it back with the same people as before so, of course, the bosses still didn't like it. And it's been in a kind of limbo ever since.

"But there's still a very keen Dr Who fandom out there — and the fans are constantly trying to find out what's going on.

"The Spielberg development seems to be the most likely if they can get it to work in terms of American television. But British fans desperately don't want it to be ruined."

So who could star in it? Terrance says: "There are a lot of English actors in Hollywood. But I've been in on casting and you just go through so many people.

"With a good production and good American team on it, it could be wonderful. Or it could be a disaster! We'll Just have to sit back and wait..."

Looking back over the history of the British Dr Who, Terrance feels that the series started to go off after the first four actors - William Hartnell, Patrick Troughton, Jon Pertwee and Tom Baker.

"Peter Davison is a super actor, but I don't think he was quite right for the role," he says.

Now aged 59, Terrance says he still feels 18 on the inside — so he's pulling his youthful energy to good Dr Who use.

"I'm currently writing an adult Dr Who novel for Virgin Publishing with Sylvester McCoy in the role. It will be about 75-80,000 words.

"Writing gives you a much wider scope — If you want a Martian space field you don't have to build it!"

Terrance has actually written as many non-Dr Who books as he has about the Time Lord. His latest, which has just been published, is a wonderful run through Royal history — which could make a TV series in itself.

A Right Royal History — A Thousand Years Of Mixed Up Monarchs (£7.99, Piccadilly Press) is part of its 'information with humour' series. The book is packed with fascinating and funny facts about the Monarchy, like how William I was "flatteringly referred to as William the Conqueror when in his early days they called him William the Bastard — which he was in every sense of the word".

It reveals which queen reigned for nine days at the age of 19 the king who was killed by a mole; the number of monarchs who've had their heads chopped off and the king who couldn't speak a word of English!

Terrance says: "It's a chance to find out about the good kings, bad kings, mad kings, sad kings and gay kings —not forgetting the queens — royal marriages, mistresses and divorces!

"I'm not a fan as it were, but the monarchy is what seems to suit us. We've tried being a republic for a time and it quickly became a dictatorship, exactly what we'd had a revolution for to avoid.

'11 you read the book, it tells you the basics of English history.

"It shows that with the Royal Family, there has always been scandals if you go right back — the inspiration for the book is nothing new, but it contains lots of surprising things.

"One of my favourites is Richard the Lionheart. He was terrifically macho, but happened to be gay. He married for political reasons fixed up by his mother."