Young Doctor Who crosses the Atlantic 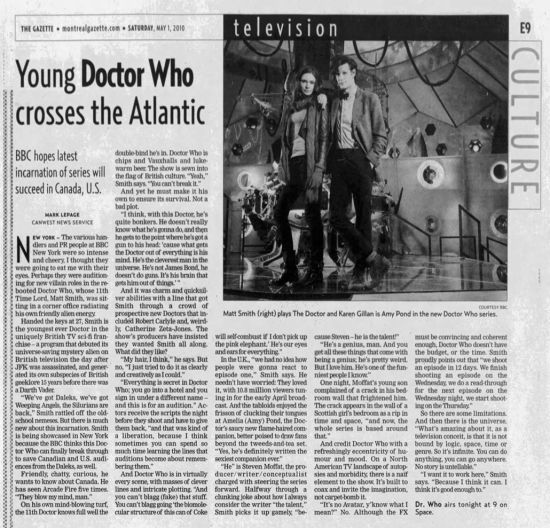 The various handlers and PR people at BBC New York were so intense and cheery, I thought they were going to eat me with their eyes. Perhaps they were auditioning for new villain roles in the rebooted Doctor Who, whose 11th Time Lord, Matt Smith, was sitting in a corner office radiating his own friendly alien energy.

Handed the keys at 27, Smith is the youngest ever Doctor in the uniquely British TV sci-fi franchise - a program that debuted its universe-saving mystery alien on British television the day after JFK was assassinated, and generated its own subspecies of British geeklore 15 years before there was a Darth Vader.

"We've got Daleks, we've got Weeping Angels, the Silurians are back," Smith rattled off the old-school nemeses. But there is much new about this incarnation. Smith is being showcased in New York because the BBC thinks this Doctor Who can finally break through to save Canadian and U.S. audiences from the Daleks, as well.

Friendly, chatty, curious, he wants to know about Canada. He has seen Arcade Fire five times. "They blow my mind, man."

On his own mind-blowing turf, the 11th Doctor knows full well the double-bind he's in. Doctor Who is chips and Vauxhalls and lukewarm beer. The show is sewn into the flag of British culture. "Yeah," Smith says. "You can't break it."

And yet he must make it his own to ensure its survival. Not a bad plot.

"I think, with this Doctor, he's quite bonkers. He doesn't really know what he's gonna do, and then he gets to the point where he's got a gun to his head: 'cause what gets the Doctor out of everything is his mind. He's the cleverest man in the universe. He's not James Bond, he doesn't do guns. It's his brain that gets him out of things.' "

And it was charm and quicksilver abilities with a line that got Smith through a crowd of prospective new Doctors that included Robert Carlyle and, weirdly, Catherine Zeta-Jones. The show's producers have insisted they wanted Smith all along. What did they like?

"My hair, I think," he says. But no, "I just tried to do it as clearly and creatively as I could."

"Everything is secret in Doctor Who; you go into a hotel and you sign in under a different name - and this is for an audition." Actors receive the scripts the night before they shoot and have to give them back, "and that was kind of a liberation, because I think sometimes you can spend so much time learning the lines that auditions become about remembering them."

And Doctor Who is in virtually every scene, with masses of clever lines and intricate plotting. "And you can't blagg (fake) that stuff. You can't blagg going 'the biomolecular structure of this can of Coke will self-combust if I don't pick up the pink elephant.' He's our eyes and ears for everything."

In the U.K., "we had no idea how people were gonna react to episode one," Smith says. He needn't have worried: They loved it, with 10.8 million viewers tuning in for the early April broadcast. And the tabloids enjoyed the frisson of clucking their tongues at Amelia (Amy) Pond, the Doctor's saucy new flame-haired companion, better poised to draw fans beyond the tweeds-and-tea set. "Yes, he's definitely written the sexiest companion ever."

"He" is Steven Moffat, the producer/writer/conceptualist charged with steering the series forward. Halfway through a clunking joke about how I always consider the writer "the talent," Smith picks it up gamely, "because Steven - he is the talent!"

"He's a genius, man. And you get all these things that come with being a genius; he's pretty weird. But I love him. He's one of the funniest people I know."

One night, Moffat's young son complained of a crack in his bedroom wall that frightened him. The crack appears in the wall of a Scottish girl's bedroom as a rip in time and space, "and now, the whole series is based around that."

And credit Doctor Who with a refreshingly eccentricity of humour and mood. On a North American TV landscape of autopsies and morbidity, there is a naïf element to the show. It's built to coax and invite the imagination, not carpet-bomb it.

So there are some limitations. And then there is the universe. "What's amazing about it, as a television conceit, is that it is not bound by logic, space, time or genre. So it's infinite. You can do anything, you can go anywhere. No story is untellable."

"I want it to work here," Smith says. "Because I think it can. I think it's good enough to."

Dr. Who airs tonight at 9 on Space.