Your Viewing Habits: A Dial Survey 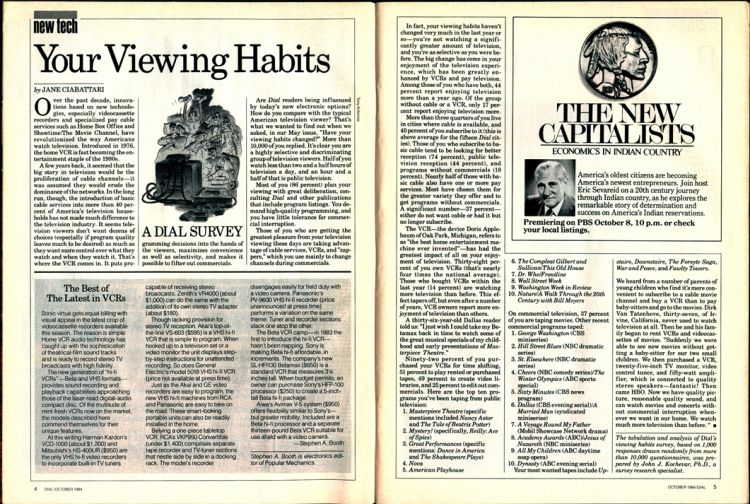 Over the past decade, innovations based on new technologies, especially videocassette recorders and specialized pay cable services such as Home Box Office and Showtime/The Movie Channel, have revolutionized the way Americans watch television. Introduced in 1976, the home VCR is fast becoming the entertainment staple of the 1980s.

A few years back, it seemed that the big story in television would be the proliferation of cable channels—it was assumed they would erode the dominance of the networks. In the long run, though, the introduction of basic cable services into more than 40 percent of America's television households has not made much difference to the television industry. It seems television viewers don't want dozens of choices (especially if program quality leaves much to be desired) as much as they want more control over what they watch and when they watch it. That's where the VCR comes in. It puts programming decisions into the hands of the viewers, maximizes convenience as well as selectivity, and makes it possible to filter out commercials.

Are Dial readers being influenced by today's new electronic options? How do you compare with the typical American television viewer? That's what we wanted to find out when we asked, in our May issue, "Have your viewing habits changed?" More than 10,000 of you replied. It's clear you are a highly selective and discriminating group of television viewers. Half of you watch less than two and a half hours of television a day, and an hour and a half of that is public television.

Most of you (86 percent) plan your viewing with great deliberation, consulting Dial and other publications that include program listings. You demand high-quality programming, and you have little tolerance for commercial interruption.

Those of you who are getting the greatest pleasure from your television viewing these days are taking advantage of cable services, VCRs, and "zappers," which you use mainly to change channels during commercials.

In fact, your viewing habits haven't changed very much in the last year or so—you're not watching a significantly greater amount of television, and you're as selective as you were before. The big change has come in your enjoyment of the television experience, which has been greatly enhanced by VCRs and pay television. Among those of you who have both, 44 percent report enjoying television more than a year ago. Of the group without cable or a VCR, only 17 percent report enjoying television more.

More than three quarters of you live in cities where cable is available, and 40 percent of you subscribe to it (this is above average for the fifteen Dial cities). Those of you who subscribe to basic cable tend to be looking for better reception (74 percent), public television reception (44 percent), and programs without commercials (18 percent). Nearly half of those with basic cable also have one or more pay services. Most have chosen them for the greater variety they offer and to get programs without commercials. A significant number-37 percent—either do not want cable or had it but no longer subscribe.

The VCR—the device Doris Applebaum of Oak Park, Michigan, refers to as "the best home entertainment machine ever invented"—has had the greatest impact of all on your enjoyment of television. Thirty-eight percent of you own VCRs (that's nearly four times the national average). Those who bought VCRs within the last year (14 percent) are watching more television than before. This effect tapers off, but even after a number of years, VCR owners report more enjoyment of television than others.

A thirty-six-year-old Dallas reader told us: "I just wish I could take my Betamax back in time to watch some of the great musical specials of my childhood and early presentations of Masterpiece Theatre."

Ninety-two percent of you purchased your VCRs for time shifting, 51 percent to play rented or purchased tapes, 49 percent to create video libraries, and 25 percent to edit out commercials. Here are the top ten programs you've been taping from public television:

10. Nature/A Walk Through the 20th Century with Bill Moyers

On commercial television, 37 percent of you are taping movies. Other recent commercial programs taped:

7. A Voyage Round My Father (Mobil Showcase Network drama)

10. Dynasty (ABC evening serial) Your most wanted tapes include Upstairs, Downstairs, The Forsyte Saga, War and Peace, and Fawlty Towers.

We heard from a number of parents of young children who find it's more convenient to subscribe to a cable movie channel and buy a VCR than to pay baby-sitters and go to the movies. Dirk Van Tatenhove, thirty-seven, of Irvine, California, never used to watch television at all. Then he and his family began to rent VCRs and videocassettes of movies. "Suddenly we were able to see new movies without getting a baby-sitter for our two small children. We then purchased a VCR, twenty-five-inch TV monitor, video control tuner, and fifty-watt amplifier, which is connected to quality stereo speakers—fantastic! Then came HBO. Now we have quality picture, reasonable quality sound, and can watch movies and concerts without commercial interruption whenever we want in our home. We watch much more television than before. "

The tabulation and analysis of Dial's viewing habits survey, based on 1,000 responses drawn randomly from more than 10,000 questionnaires, was prepared by John J. Kochevar, Ph.D., a survey research specialist.