Zany world of Dr. Who 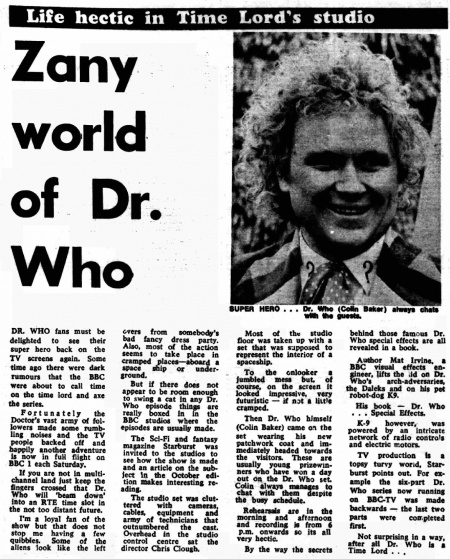 DR. WHO fans must be delighted to see their super hero back on the TV screens again. Some time ago there were dark rumours that the BBC were about to call time on the time lord and axe the series.

Fortunately the Doctor's vast army of followers made some rumbling noises and the TV people backed off and happily another adventure is now in full flight on BBC 1 each Saturday.

If you are not in multichannel land just keep the fingers crossed that Dr. Who will 'beam down' into an RTE time slot In the not too distant future.

I'm a loyal fan of the show but that does not stop me having a few quibbles. Some of the aliens look like the left over from somebody's bad fancy dress party. Also, most of the action seems to take place in cramped places—aboard a space ship or underground.

But if there does not appear to be room enough to swing a cat in any Dr. Who episode things are really boxed in in the BBC studios where the episodes are usually made.

The Sci-Fi and fantasy magazine Starburst was invited to the studios to see how the show is made and an article on the subject in the October edition makes interesting reading.

The studio set was cluttered with cameras, cables, equipment and army of technicians that outnumbered the cast. Overhead in the studio control centre sat the director Chris Clough.

Most of the studio floor was taken up with a set that was supposed to represent the Interior of a spaceship.

To the onlooker a jumbled mess but, of course, on the screen it looked impressive, very futuristic — if not a little cramped.

Then Dr. Who himself (Colin Baker) came on the set wearing his new patchwork coat and immediately headed towards the visitors. These are usually young prizewinners who have won a day out on the Dr. Who set. Cohn always manages to chat with them despite the busy schedule.

Rehearsals are in the morning and afternoon and recording is from 6 p.m. onwards so its all very hectic.

By the way the secrets behind those famous Dr. Who special effects are all revealed in a book.

Author Mat Irvine, a BBC visual effects engineer, lifts the lid on Dr. Who's arch-adversaries, the Daleks and on his pet robot-dog K9.

K-9 however, was powered by an intricate network of radio controls and electric motors.

TV production is a topsy turvy world, Starburst points out. For example the six-part Dr. Who series now running on BBC-TV was made backwards — the last two parts were completed first.

Not surprising in a way, after alt Dr. Who is a Time Lord ...