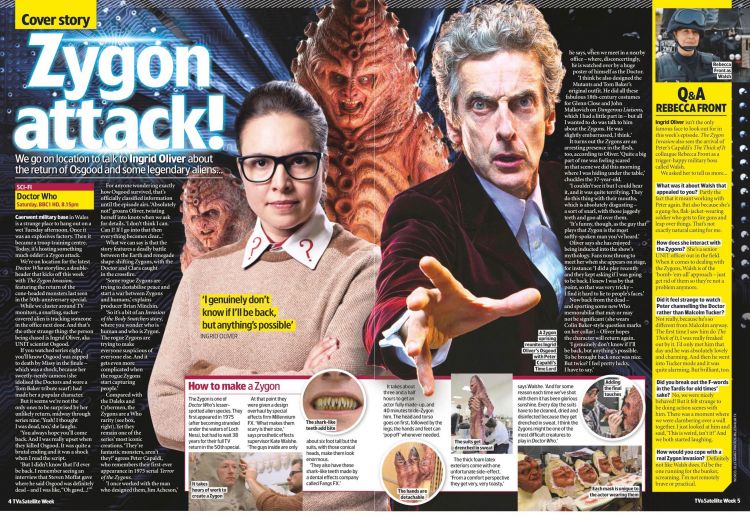 We go on location to talk to Ingrid Oliver about the return of Osgood and some legendary aliens...

Caerwent military base in Wales is a strange place to hang out on a wet Tuesday afternoon. Once it was an explosives factory. Then it became a troop training centre. Today, it's hosting something much odder: a Zygon attack.

We're on location for the latest Doctor Who storyline, a doubleheader that kicks off this week with The Zygon Invasion, featuring the return of the cone-headed monsters last seen in the 50th-anniversary special.

While we cluster around TV monitors, a snarling, sucker-covered alien is tracking someone in the office next door. And that's the other strange thing: the person being chased is Ingrid Oliver, aka UNIT scientist Osgood.

If you watched series eight, you'll know Osgood was zapped to death by Missy in the finale — which was a shock, because her sweetly-nerdy cameos (she idolised the Doctors and wore a Tom Baker tribute scarf) had made her a popular character.

But it seems we're not the only ones to be surprised by her unlikely return, midway through series nine. 'Yeah! I thought I was dead, too; she laughs.

'You always hope you'll come back. And I was really upset when they killed Osgood. It was quite a brutal ending and it was a shock when I read the script.

'But I didn't know that I'd ever be back. I remember seeing an interview that Steven Moffat gave where he said Osgood was definitely dead — and I was like, "Oh gawd...!"'

For anyone wondering exactly how Osgood survived, that's officially classified information until the episode airs. 'Absolutely not!' groans Oliver, twisting herself into knots when we ask for details. 'I don't think I can. Can I? If I go into that then everything becomes clear...'

What we can say is that the story features a deadly battle between the Earth and renegade shape-shifting Zygons, with the Doctor and Clara caught in the crossfire.

'Some rogue Zygons are trying to destabilise peace and start a war between Zygons and humans: explains producer Brian Minchin.

'So it's a bit of an Invasion of the Body Snatchers story, where you wonder who is human and who is Zygon. The rogue Zygons are trying to make everyone suspicious of everyone else. And it gets even more complicated when the rogue Zygons start capturing people:

Compared with the Daleks and Cybermen, the Zygons are a Who rarity (see box, right).Yet they remain one of the series' most iconic creations. 'They're fantastic monsters, aren't

they?' agrees Peter Capaldi, who remembers their first-ever appearance in 1975 serial Terror of the Zygons.

'I once worked with the man who designed them, Jim Acheson, he says, when we meet in a nearby office — where, disconcertingly, he is watched over by a huge poster of himself as the Doctor.

'I think he also designed the Mutants and Tom Baker's original outfit. He did all these fabulous 18th-century costumes for Glenn Close and John Malkovich on Dangerous Liaisons, which I had a little part in — but all I wanted to do was talk to him about the Zygons. He was slightly embarrassed, I think.'

It turns out the Zygons are an arresting presence in the flesh, too, according to Oliver. 'Quite a big part of me was feeling scared in that scene we did this morning where I was hiding under the table,' chuckles the 37-year-old.

'I couldn't see it but I could hear it, and it was quite terrifying. They do this thing with their mouths, which is absolutely disgusting — a sort of snarl, with those jaggedy teeth and goo all over them.

'It's funny, though, as the guy that plays that Zygon is the most softly-spoken man you've heard.'

Oliver says she has enjoyed being inducted into the show's mythology. Fans now throng to meet her when she appears on stage, for instance: 'I did a play recently and they kept asking if I was going to be back. I knew I was by that point, so that was very tricky — I found it hard to lie to people's faces.'

Now back from the dead — and sporting some new Who memorabilia that may or may not be significant (she wears Colin Baker-style question marks on her collar) — Oliver hopes the character will return again.

'I genuinely don't know if I'll be back, but anything's possible. To be brought back once was nice. But twice? I feel pretty lucky, I have to say.'

Ingrid Oliver isn't the only famous face to look out for in this week's episode. The Zygon Invasion also sees the arrival of Peter's Capaldi's The Thick of It colleague Rebecca Front as a trigger-happy military boss called Walsh.

We asked her to tell us more...

What was it about Walsh that appealed to you?

Partly the fact that it meant working with Peter again. But also because she's a gung-ho, flak-jacket-wearing soldier who gets to fire guns and leap over things. That's not exactly natural casting for me.

How does she interact with the Zygons?

She's a senior UNIT officer out in the field. When it comes to dealing with the Zygons, Walsh is of the 'bomb-'em-all' approach — just get rid of them so they're not a problem anymore.

Did it feel strange to watch Peter channelling the Doctor rather than Malcolm Tucker?

Not really, because he's so different from Malcolm anyway. The first time I saw him do The Thick of It, I was really freaked out by it. I'd only met him that day and he was absolutely lovely and charming. And then he went into Tucker mode and it was quite alarming. But brilliant, too.

Did you break out the F-words in the Tardis for old times' sake?

No, we were nicely behaved! But it felt strange to be doing action scenes with him. There was a moment where we were clambering over a wall together. I just looked at him and said, 'This is weird, isn't it?' And we both started laughing.

How would you cope with a real Zygon invasion?

Definitely not like Walsh does. I'd be the one running for the bunker, screaming. I'm not remotely brave or practical.

How to make a Zygon

The Zygon is one of Doctor Who's lesser-spotted alien species. They first appeared in 1975 (after becoming stranded under the waters of Loch Ness), but had to wait 38 years for their full TV return in the 50th special.

At that point they were given a design overhaul by special effects firm Millennium FX. 'What makes them scary is their size,' says prosthetic effects supervisor Kate Walshe. 'The guys inside are only about six foot tall but the suits, with those conical heads, make them look enormous.

'They also have these shark-like teeth made by a dental effects company called Fangs FX.'

It takes about three and a half hours to get an actor fully made-up, and 40 minutes to de-Zygon him. The head and torso goes on first, followed by the legs; the hands and feet can 'pop off' whenever needed.

The thick foam latex exteriors come with one unfortunate side-effect. 'From a comfort perspective they get very, very toasty,' says Walshe. 'And for some reason each time we've shot with them it has been glorious sunshine. Every day the suits have to be cleaned, dried and disinfected because they get drenched in sweat. I think the Zygons might be one of the most difficult creatures to play in Doctor Who'

The hands are detachable

The suits get drenched in sweat

Each mask is unique to the actor wearing them