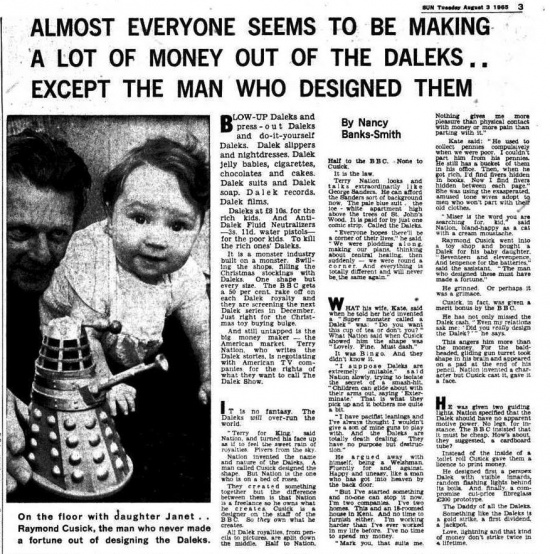 Daleks at £8 10s. for the rich kids. And Anti-Dalek Fluid Neutralizers —3s. 11d. water pistols—tor the poor kids. To kill the rich ones' Daleks.

It is a monster Industry built on a monster. Swilling the shops, filling the Christmas stockings with Daleks. One shape but every else. The B B C gets a 50 per cent rake off on each Dalek royalty and they are screening the next Dalek series in December. Just right for the Christmas toy buying bulge.

And still untapped is the big money maker — the American market. Terry Nation, who writes the Dalek stories, Is negotiating with American T V companies for the rights of what they want to call The Dalek Show.

IT is no fantasy. The Daleks will over-run the world.

"Terry for King" said Nation, and turned his face up as if to feel the sweet rain of royalties. Fivers from the sky.

Nation invented the name and nature of the Daleks. A man called Cusick designed the shape. But Nation is the one who is on a bed of roses.

They created something together but the difference between them is that Nation is a freelance so he owns what he creates. Cusick is a designer on the staff of the BBC. So they own what he creates.

All Dalek royalties, from pencils to pictures are split down the middle. Half to Nation. Half to the BBC. None to Cusick.

It la the law.

Terry Nation looks and talks extraordinarily like George Sanders. He can afford the Sanders sort of background now. The pale blue suit, the ice - white apartment high above the trees of St. John's Wood. It is paid for by just one comic strip. Called the Daleks.

"Everyone hopes there'll be a corner of their lives." he said. "We were plodding along making out plans. Thinking about central heating. then suddenly — we were round a Corner. And everything is totally different and will never blithe same again"

WHAT his wife, Kate said when he told her he'd invented a "Super monster called Dalek" was: "Do you want this cup of tea or don't you?" What Nation said when Cusick showed him the shape was "Lovely. Fine. Must dash."

It was Bingo. And they didn't know it.

"I suppose Daleks are extremely imitable," said Nation slowly. trying to isolate the secret of a smash-hit. "Children can glide about with their arms out, saying 'Exterminate.' That is what they pick up and it bothers me a bit.

"I have pacifist leanings and I've always thought I wouldn't give a son of mine guns to play with. And the Daleks are totally death dealing. They have no purpose but destruction."

He argued away with himself, being a Welshman. Fluently for and against. Happy and uneasy, like a moan who has got into heaven by the back door.

"But I've started something and no-one can stop it now. I'm two companies. I've two homes. This and an 18-roomed house in Kent. And no time to furnish either. I'm working harder than I've ever worked in my life before. I've no time to spend my money.

"Mark you, that suits me. Nothing gives me more pleasure than physical contact with money or more pain than parting with it."

Kate said: "He used to collect pennies compulsively when we were poor. I couldn't part him from his pennies. He still has a bucket of thaw in his office. Then, when he got rich, I'd find fivers hidden in books. Now I and fivers hidden between each page." She was using the exasperated, amused tone wives adopt to men who won't part with their old clothes,

"Miser Is the word you are searching for. kid," said Nation, bland-happy as a cat with a cream moustache.

Raymond Cusick went into a toy shop and bought a Dalek for his baby daughter. "Seventeen and elevenpence. And tenpence for the batteries," said the assistant. "The man who designed them must made a fortune."

He grinned. Or perhaps it was a grimace.

Cusick, in fact, was given a merit bonus by the B B C.

He has not only missed the Dalek cash. "Even my relations ask me: "Did you redly design the Dalek?" he says.

This angers him more than the money. For the baldheaded, gliding gun turret took shape in his brain and appeared on a pad at the end of his pencil. Nation invented a character but Cusick cast it, gave it a face.

He was given two guiding lighta. Nation specified that the Dalek should have no motive power. No legs, for instance. The B B C insisted that it must be cheap. How's about, they suggested, cardboard tube?

Instead of the inside of a toilet roll Cusick gave them a licence to print money.

He designed first a Perspex Dalek with visible innards, random flashing lights behind its boils. And, finally. a compromise cut-price fibreglass £200 prototype

The Daddy of all the Daleks.

Something like the Daleks is a gold strike, a first dividend, a jackpot.

Love, lightning and that kind of money don't strike twice in a lifetime.

Caption: On the floor with daughter Janet .. Raymond Cusick. the man who never made a fortune out of designing the Daleks.