And the date of the election is ... 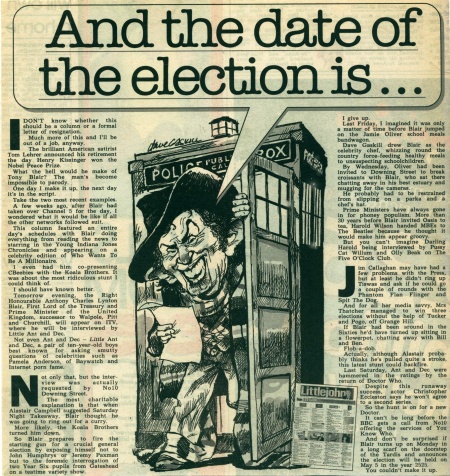 I DON'T know whether this should be a column or a formal letter of resignation. Much more of this and I'll be out of a job, anyway. The brilliant American satirist Tom Lehrer announced his retirement the day Henry Kissinger won the Nobel Peace Prize.

What the hell would he make of Tony Blair? The man's become impossible to parody.

One day I make it up, the next day it's in the script.

Take the two most recent examples.

A few weeks ago, after Blair had taken over Channel 5 for the day, I wondered what it would be like if all the other networks followed suit.

This column featured an entire day's schedules with Blair doing everything from reading the news to starring in the Young Indiana Jones Chronicles and appearing on a celebrity edition of Who Wants To Be A Millionaire.

I even had him co-presenting CBeebies with the Koala Brothers. It was about the most ridiculous stunt I could think of.

I should have known better.

Tomorrow evening, the Right Honourable Anthony Charles Lynton Blair, First Lord of the Treasury and Prime Minister of the United Kingdom, successor to Walpole, Pitt and Churchill, will appear on ITV, where he will be interviewed by Little Ant and Dec.

Not only that, but the interview was actually requested by No10 Downing Street.

The most charitable explanation is that when Alastair Campbell suggested Saturday Night Takeaway, Blair thought he was going to ring out for a curry. More likely, the Koala Brothers turned him down.

So Blair prepares to fire the starting gun for a crucial general election by exposing himself not to John Humphrys or Jeremy Paxman but to the forensic interrogation of two Year Six pupils from Gateshead on a teatime variety show.

Last Friday, I imagined it was only a matter of time before Blair jumped on the Jamie Oliver school meals bandwagon.

By Wednesday, Oliver had been invited to Downing Street to break croissants with Blair, who sat there chatting away in his best estuary and mugging for the cameras.

He probably had to be restrained from slipping on a parka and a chef's hat.

Prime Ministers have always gone in for phoney populism. More than 30 years before Blair invited Oasis to tea, Harold Wilson handed MBEs to The Beatles because he thought it would make him appear groovy.

But you can't imagine Darling Harold being interviewed by Pussy Cat Willum and Oily Beak on The Five O'Clock Club.

Jim Callaghan may have had a few problems with the Press, but at least he didn't ring up Tiswas and ask if he could go a couple of rounds with the Phantom Flan Flinger and Spit The Dog.

And for all her media savvy, Mrs Thatcher managed to win three elections without the help of Tucker and Pogo, off Grange Hill.

If Blair had been around in the Sixties he'd have turned up sitting in a flowerpot, chatting away with Bill and Ben.

Actually, although Alastair probably thinks he's pulled quite a stroke, this latest stunt could backfire.

Last Saturday, Ant and Dec were hammered in the ratings by the of Doctor Who.

Despite this runaway success, actor Christopher Eccleston says he won't agree to a second series.

So the hunt is on for a new Doctor.

It can't be long before the BBC gets a call from No10 offering the You Know Who.

And don't be surprised if Blair turns up on Monday in a long scarf on the doorstep of the Tardis and announces the election will be held on May 5 in the year 2525.

You couldn't make it up.