BBC faces losing out to Netflix in battle for young viewers 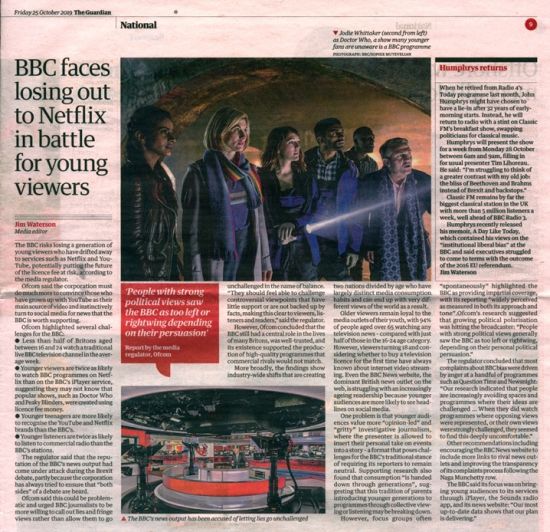 The BBC risks losing a generation of young viewers who have drifted away to services such as Netflix and You-Tube, potentially putting the future of the licence fee at risk, according to the media regulator.

Ofcom said the corporation must do much more to convince those who have grown up with YouTube as their main source of video and instinctively turn to social media for news that the BBC is worth supporting.

The regulator said that the reputation of the BBC's news output had come under attack during the Brexit debate, partly because the corporation has always tried to ensure that "both sides" of a debate are heard.

Ofcom said this could be problematic and urged BBC journalists to be more willing to call out lies and fringe views rather than allow them to go unchallenged in the name of balance. "They should feel able to challenge controversial viewpoints that have little support or are not backed up by facts, making this clear to viewers, listeners and readers," said the regulator.

However, Ofcom concluded that the BBC still had a central role in the lives of many Britons, was well-trusted, and its existence supported the production of high-quality programmes that commercial rivals would not match.

More broadly, the findings show industry-wide shifts that are creating two nations divided by age who have largely distinct media consumption habits and can end up with very different views of the world as a result.

Older viewers remain loyal to the media outlets of their youth, with 94% of people aged over 65 watching any television news - compared with just half of those in the 16-24 age category. However, viewers turning 18 and considering whether to buy a television licence for the first time have always known about interne video streaming. Even the BBC News website, the dominant British news outlet on the web, is struggling with an increasingly ageing readership because younger audiences are more likely to see headlines on social media.

One problem is that younger audiences value more "opinion-led" and "gritty" investigative journalism, where the presenter is allowed to insert their personal take on events into a story - a format that poses challenges for the BBC's traditional stance of requiring its reporters to remain neutral. Supporting research also found that consumption "is handed down through generations", suggesting that this tradition of parents introducing younger generations to programmes through collective viewing or listening may be breaking down.

However, focus groups often "spontaneously" highlighted the BBC as providing impartial coverage, with its reporting "widely perceived as measured in both its approach and tone". Ofcom's research suggested that growing political polarisation was hitting the broadcaster: "People with strong political views generally saw the BBC as too left or rightwing, depending on their personal political persuasion."

The regulator concluded that most complaints about BBC bias were driven by anger at a handful of programmes such as Question Time and Newsnight: "Our research indicated that people are increasingly avoiding spaces and programmes where their ideas are challenged ... When they did watch programmes where opposing views were represented, or their own views were strongly challenged, they seemed to find this deeply uncomfortable."

Other recommendations including encouraging the BBC News website to include more links to rival news outlets and improving the transparency of its complaints process following the Naga Munchetty row.

The BBC said its focus was on bringing young audiences to its services through iPlayer, the Sounds radio app, and its news website: "Our most up-to-date data shows that our plan is delivering." Caption: The BBC's news output has been accused of letting lies go unchallenged

Jodie Whittaker (second from left) as Doctor Who, a show many younger fans are unaware is a BBC programme