Casanova Will Be the New Dr Who 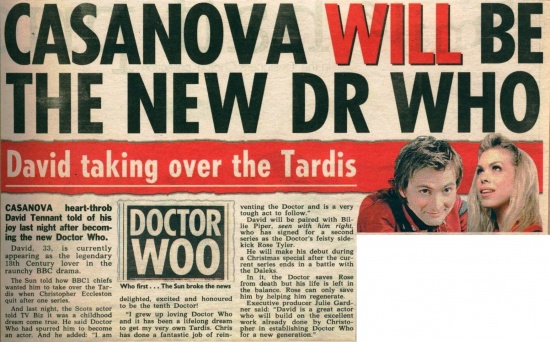 CASANOVA heart-throb David Tennant told of his joy last night after becoming the new Doctor Who.

David, 33, is currently appearing as the legendary 18th Century lover in the raunchy BBC drama.

The Sun told how BBC1 chiefs wanted him to take over the Tar-dis when Christopher Eccleston quit after one series.

And last night, the Scots actor told TV Biz it was a childhood dream come true. He said Doctor Who had spurred him to become an actor. And he added: "I am delighted, excited and honoured to be the tenth Doctor!

"I grew up loving Doctor Who and it has been a lifelong dream to get my very own Tardis. Chris has done a fantastic job of reinventing the Doctor and is a very tough act to follow."

David will be paired with Billie Piper. seen with him right. who has signed for a second series as the Doctor's feisty sidekick Rose Tyler.

He will make his debut during a Christmas special after the current series ends in a battle with the Daleks.

In it, the Doctor saves Rose from death but his life is left in the balance. Rose can only save him by helping him regenerate.

Executive producer Julie Gardner said: "David is a great actor who will build on the excellent work already done by Christopher in establishing Doctor Who for a new generation."

DOCTOR WOO Who first . .. The Sun broke the news