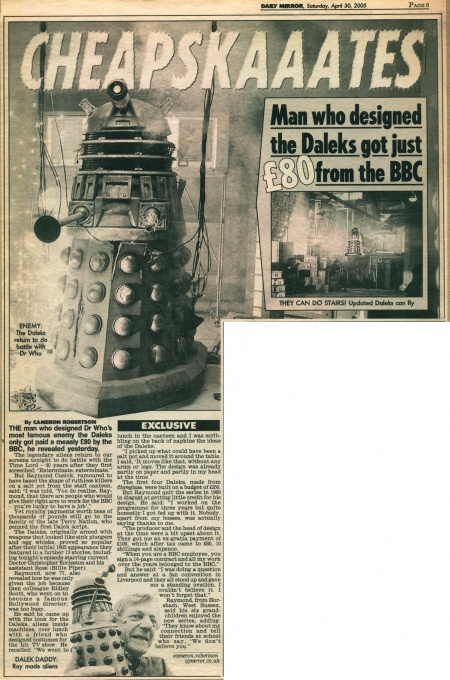 THE man who designed Dr Who's most famous enemy the Daleks only got paid a measly £80 by the BBC, he revealed yesterday.

The legendary aliens return to our screens tonight to do battle with the Time Lord - 40 years after they first screeched: "Exterminate, exterminate."

But Raymond Cusick, rumoured to have based the shape of ruthless killers on a salt pot from the staff canteen. said: "I was told. 'You do realise, Raymond, that there are people who would give their right arm to work for the BBC you're lucky to have a job'."

Yet royalty payments worth tens of thousands of pounds still go to the family of the late Terry Nation, who penned the first Dalek script.

The Daleks, originally armed with weapons that looked like sink plungers and egg whisks, proved so popular after their initial 1963 appearance they featured in a further 13 stories, including tonight's episode starring current Doctor Christopher Eccleston and his assistant Rose (Billie Piper).

Raymond, now 77, also revealed how he was only given the job because then colleague Ridley Scott, who went on to become a famous Hollywood director, was too busy.

He said he came up with the look for the Daleks, aliens inside machines, over lunch with a friend who designed costumes for the hit TV show. He recalled: "We went to lunch in the canteen and I was scribbling on the back of napkins the ideas of the Daleks.

"I picked up what could have been a salt pot and moved it around the table. I said, "It moves like that, without any arms or legs. The design was already partly on paper and partly in my head at the time."

The first four Daleks. made from fibreglass, were built on a budget of £250.

But Raymond quit the series in 1966 in disgust at getting little credit for his design. He said: "I worked on the programme for three years but quite honestly I got fed up with it. Nobody, apart from my bosses, was actually saying thanks to me.

"The producer and the head of design at the time were a bit upset about it. They got me an ex-gratia payment of £100, which after tax came to £80, 10 shillings and sixpence.

"When you are a BBC employee, you sign a 14-page contract and all my work over the years belonged to the BBC."

But he said: "I was doing a question and answer at a fan convention in Liverpool and they all stood up and gave me a standing ovation. I couldn't believe it. I won't forget that."

Raymond, from Horsham, West Sussex, said his six grandchildren enjoyed the new series, adding: "They know about my connection and tell their friends at school who say, "We don't believe you."

THEY CAN DO STAIRS! Updated Daleks can fly

ENEMY: The Daleks return to do battle with Dr Who