Doc's River was just too winding 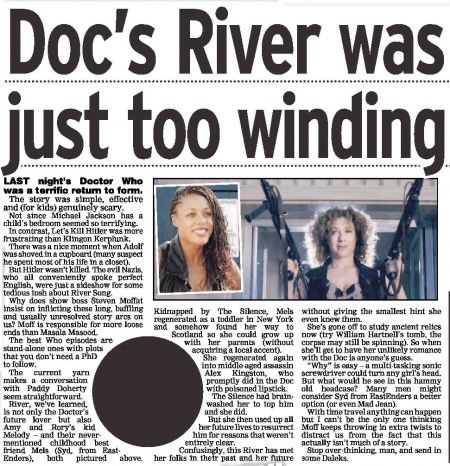 LAST night's Doctor Who was a terrific return to form.

The story was simple, effective and (for kids) genuinely scary.

Not since Michael Jackson has a child's bedroom seemed so terrifying.

There was a nice moment when Adolf was shoved in a cupboard (many suspect he spent most of his life in a closet).

But Hitler wasn't killed. The evil Nazis, who all conveniently spoke perfect English, were just a sideshow for some tedious tosh about River Song.

Why does show boss Steven Moffat insist on inflicting these long, baffling and usually unresolved story arcs on us? Moff is responsible for more loose ends than Masala Masood.

The best Who episodes are stand-alone ones with plots that you don't need a PhD to follow.

River, we've learned, is not only the Doctor's future lover but also Amy and Rory's kid Melody — and their never-mentioned childhood best friend Mels (Syd, from East-Enders), both pictured above.

Kidnapped by The Silence, Mels regenerated as a toddler in New York and somehow found her way to Scotland so she could grow up with her parents (without acquiring a local accent). She regenerated again into middle-aged assassin Alex Kingston, who promptly did in the Doc with poisoned lipstick. The Silence had brainwashed her to top him and she did.

But she then used up all her future lives to resurrect him for reasons that weren't entirely clear.

Confusingly, this River has met her folks in their past and her future without giving the smallest hint she even knew them.

She's gone off to study ancient relics now (try William Hartnell's tomb, the corpse may still be spinning). So when she'll get to have her unlikely romance with the Doc is anyone's guess.

"Why" is easy — a multi-tasking sonic screwdriver could turn any girl's head. But what would he see in this hammy old headcase? Many men might consider Syd from EastEnders a better option (or even Mad Jean).

With time travel anything can happen but I can't be the only one thinking Moff keeps throwing in extra twists to distract us from the fact that this actually isn't much of a story.

Stop over-thinking, man, and send in some Daleks.