Doctor Who ... the future 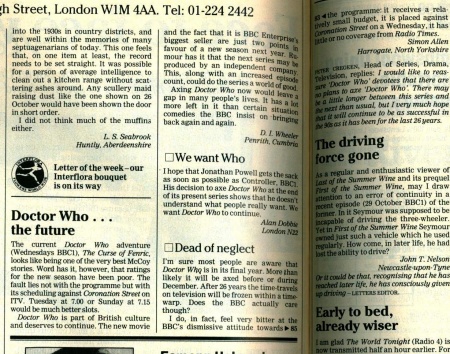 Doctor Who ... the future

The current Doctor Who adventure (Wednesdays BBC1), The Curse of Fenric, looks like being one of the very best McCoy stories. Word has it, however, that ratings for the new season have been poor. The fault lies not with the programme but with its scheduling against Coronation Street on ITV. Tuesday at 7.00 or Sunday at 7.15 would be much better slots.

Doctor Who is part of British culture and deserves to continue. The new movie and the fact that it is BBC Enterprise's biggest seller are just two points in favour of a new season next year. Rumour has it that the next series may be produced by an independent company This, along with an increased episode count, could do the series a world of goal Axing Doctor Who now would leave a gap in many people's lives. It has a lot more left in it than certain situation comedies the BBC insist on bringing back again and again.

I hope that Jonathan Powell gets the sack as soon as possible as Controller, BBC1. His decision to axe Doctor Who at the end of its present series shows that he doesn't understand what people really want. We want Doctor Who to continue.

I'm sure most people are aware that Doctor Who is in its final year. More than likely it will be axed before or during December. After 26 years the time-travels on television will be frozen within a time-warp. Does the BBC actually care though?

I do, in fact, feel very bitter at the BBC's dismissive attitude towards the programme: it receives a relatively small budget, it is placed against Coronation Street on a Wednesday, it has or no coverage from Radio Times.

PETER CREGEEN, Head of Series, Drama Television, replies: I would like to reassure Doctor Who' devotees that there are ns to axe 'Doctor Who'. There may be a little longer between this series and the next than usual, but I very much hope at it will continue to be as successful in the 90s as it has been for the last 26 years.