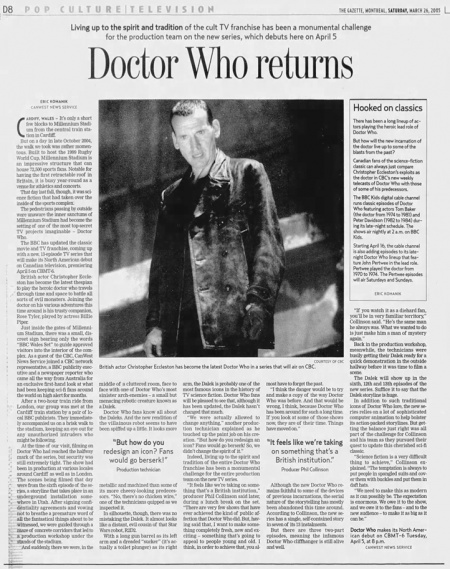 It's only a short few blocks to Millennium Stadium from the central train station in Cardiff.

But on a day in late October 2004, the walk we took was rather momentous. Built to host the 1999 Rugby World Cup, Millennium Stadium is an impressive structure that can house 72,500 sports fans. Notable for having the first retractable roof in Britain, it is busy year-round as a venue for athletics and concerts.

That day last fall, though, it was science fiction that had taken over the inside of the sports complex.

The pedestrians passing by outside were unaware the inner sanctums of Millennium Stadium had become the setting of one of the most top-secret TV projects imaginable - Doctor Who.

The BBC has updated the classic movie and TV franchise, coming up with a new, 13-episode TV series that will make its North American debut on Canadian television, premiering April 5 on CBMT-6.

British actor Christopher Eccleston has become the latest thespian to play the heroic doctor who travels through time and space to battle all sorts of evil monsters. Joining the doctor on his various adventures this time around is his trusty companion, Rose Tyler, played by actress Billie Piper.

Just inside the gates of Millennium Stadium, there was a small, discreet sign bearing only the words "BBC Wales Set" to guide approved visitors into the interior of the complex. As a guest of the CBC, CanWest News Service joined a CBC network representative, a BBC publicity executive and a newspaper reporter who came all the way from Australia for an exclusive first-hand look at what had been keeping sci-fi fans around the world on high alert for months.

After a two-hour train ride from London, our group was met at the Cardiff train station by a pair of local BBC publicists. They immediately accompanied us on a brisk walk to the stadium, keeping an eye out for any unauthorized intruders who might be following.

At the time of our visit, filming on Doctor Who had reached the halfway mark of the series, but security was still extremely tight. The show had been in production at various locales around Cardiff as well as in London. The scenes being filmed that day were from the sixth episode of the series, a storyline that takes place in an underground installation somewhere in Utah. After signing confidentiality agreements and vowing not to breathe a premature word of all the fantastical things about to be witnessed, we were guided through a maze of concrete corridors that led to a production workshop under the stands of the stadium.

And suddenly, there we were, in the middle of a cluttered room, face to face with one of Doctor Who's most sinister arch-enemies - a small but menacing robotic creature known as a Dalek.

Doctor Who fans know all about the Daleks. And the new rendition of the villainous robot seems to have been spiffed up a little. It looks more metallic and machined than some of its more cheesy-looking predecessors. "No, there's no chicken wire," one of the technicians quipped as we inspected it.

In silhouette, though, there was no mistaking the Dalek. It almost looks like a distant, evil cousin of that Star Wars robot, R2D2.

With a long gun barrel as its left arm and a dreaded "sucker" (it's actually a toilet plunger) as its right arm, the Dalek is probably one of the most famous icons in the history of TV science fiction. Doctor Who fans will be pleased to see that, although it has been updated, the Dalek hasn't changed that much.

"We were actually allowed to change anything," another production technician explained as he touched up the paint job on his creation. "But how do you redesign an icon? Fans would go berserk! So, we didn't change the spirit of it."

Indeed, living up to the spirit and tradition of the entire Doctor Who franchise has been a monumental challenge for the entire production team on the new TV series.

"It feels like we're taking on something that's a British institution," producer Phil Collinson said later, during a lunch break on the set. "There are very few shows that have ever achieved the kind of public affection that Doctor Who did. But, having said that, I want to make something completely fresh, new and exciting - something that's going to appeal to people young and old. I think, in order to achieve that, you almost have to forget the past.

Although the new Doctor Who remains faithful to some of the devices of previous incarnations, the serial nature of the storytelling has mostly been abandoned this time around. According to Collinson, the new series has a single, self-contained story in seven of its 13 instalments.

But there are three two-part episodes, meaning the infamous Doctor Who cliffhanger is still alive and well.

"If you watch it as a diehard fan, you'll be in very familiar territory," Collinson said. "He's the same man he always was. What we wanted to do is just make him a man of mystery again."

Back in the production workshop, meanwhile, the technicians were busily getting their Dalek ready for a quick demonstration in the outside hallway before it was time to film a scene.

The Dalek will show up in the sixth, 12th and 13th episodes of the new series. Suffice it to say that the Dalek storyline is huge.

In addition to such traditional icons of Doctor Who lore, the new series relies on a lot of sophisticated computer animation to help bolster its action-packed storylines. But getting the balance just right was all part of the challenge for Collinson and his team as they pursued their quest to update this cherished sci-fi classic.

"Science fiction is a very difficult thing to achieve," Collinson explained. "The temptation is always to put people in spangled suits and cover them with buckles and put them in daft hats.

"We need to make this as modern as it can possibly be. The expectation is enormous. We owe it to the show, and we owe it to the fans - and to the new audience - to make it as big as it can be."

Doctor Who makes its North American debut on CBMT-6 Tuesday, April 5, at 8 p.m.

There has been a long lineup of actors playing the heroic lead role of Doctor Who.

But how will the new incarnation of the doctor live up to some of the blasts from the past?

Canadian fans of the science-fiction classic can always just compare Christopher Eccleston's exploits as the doctor in CBC's new weekly telecasts of Doctor Who with those of some of his predecessors.

The BBC Kids digital cable channel runs classic episodes of Doctor Who featuring actors Tom Baker (the doctor from 1974 to 1981) and Peter Davidson (1982 to 1984) during its late-night schedule. The shows air nightly at 2 a.m. on BBC Kids.

Starting April 16, the cable channel is also adding episodes to its late-night Doctor Who lineup that feature John Pertwee in the lead role. Pertwee played the doctor from 1970 to 1974. The Pertwee episodes will air Saturdays and Sundays.

Caption: British actor Christopher Eccleston has become the latest Doctor Who in a series that will air on CBC.