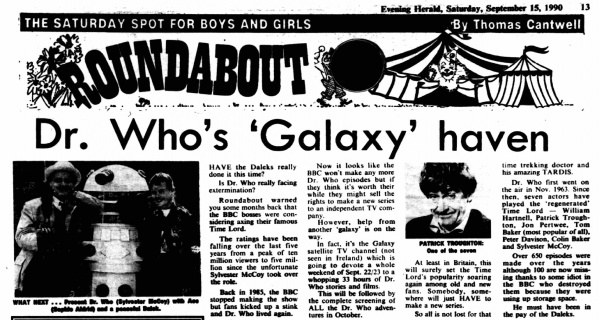 HAVE the Daleks really done it this time?

Is Dr. Who really facing extermination?

Roundabout warned you some months back that the BBC bosses were considering axing their famous Time Lord.

The ratings have been falling over the last live years from a peak of ten million viewers to five million since the unfortunate Sylvester McCoy took over the role.

Back in 1965, the BBC stopped making the show but fans kicked up a stink and Dr. Who lived again.

Now it looks like the BBC won't make any more Dr. Who episodes but if they think it worth their while they might sell the rights to make a new series to an independent TV company.

However, help from another 'galaxy' is on the way.

In fact, it's the Galaxy satellite TV channel (not seen in Ireland) which is going to devote a whole weekend of Sept. 22/23 to a whopping 33 hours of Dr. Who stories and films.

This will be followed by the complete screening of ALL the Dr. Who adventures in October.

At least in Britain, this will surely set the Time Lord's popularity soaring again among old and new fans. Somebody, somewhere will just HAVE to make a new series.

So all is not lost for that time trekking doctor and his amazing TARDIS.

Dr. Who first went on the air in Nov. 1963 Since then, seven actors have played the 'regenerated' Time Lord — William Hartnell, Patrick Troughton, Jon Pertwee, Tom Baker (most popular of all). Peter Davison, Colin Baker and Sylvester McCoy.

Over 630 episodes were made over the years although 100 are now missing thanks to some idiot in the BBC who destroyed them because they were using up storage space.

He must have been in the pay of the Daleks.

Caption: WHAT NEXT ... Present Dr. Who (Sylvester McCoy) with Ace (Sophie Aldred) and a peaceful Dalek.

Caption: PATRICK TROUGHTON: One of the seven