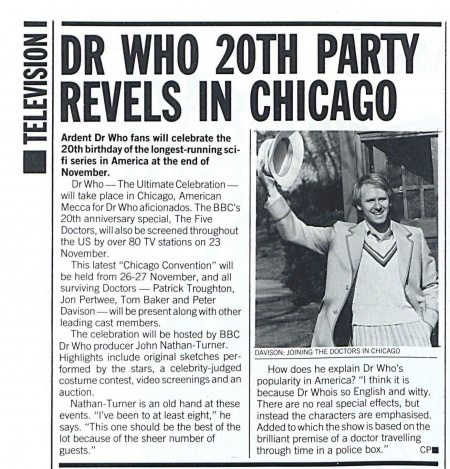 Ardent Dr Who fans will celebrate the 20th birthday of the longest-running sci-fi series in America at the end of November.

Dr Who— The Ultimate Celebration— will take place in Chicago, American Mecca for Dr Who aficionados. The BBC's 20th anniversary special, The Five Doctors, will also be screened throughout the US by over 80 TV stations on 23 November.

This latest "Chicago Convention" will be held from 26-27 November, and all surviving Doctors — Patrick Troughton, Jon Pertwee, Tom Baker and Peter Davison —will be present along with other leading cast members.

The celebration will be hosted by BBC Dr Who producer John Nathan-Turner. Highlights include original sketches performed by the stars, a celebrity-judged costume contest, video screenings and an auction.

Nathan-Turner is an old hand at these events. "I've been to at least eight," he says. "This one should be the best of the lot because of the sheer number of guests."

How does he explain Dr Who's popularity in America? "I think it is because Dr Who is so English and witty. There are no real special effects, but instead the characters are emphasised. Added to which the show is based on the brilliant premise of a doctor travelling through time in a police box."