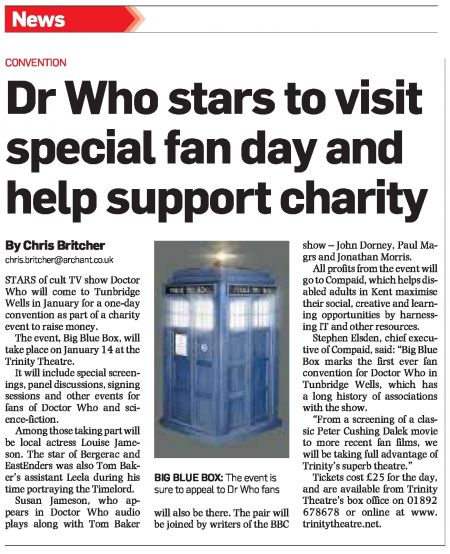 STARS of cult TV show Doctor Who will come to Tunbridge Wells in January for a one-day convention as part of a charity event to raise money.

The event, Big Blue Box, will take place on January 14 at the Trinity Theatre.

It will include special screenings, panel discussions, signing sessions and other events for fans of Doctor Who and science-fiction.

Among those taking part will be local actress Louise Jameson. The star of Bergerac and EastEnders was also Tom Baker's assistant Leela during his time portraying the Timelord.

Susan Jameson, who appears in Doctor Who audio plays along with Tom Baker will also be there. The pair will be joined by writers of the BBC show — John Dorney, Paul Ma-grs and Jonathan Morris.

All profits from the event will go to Compaid, which helps disabled adults in Kent maximise their social, creative and learning opportunities by harnessing IT and other resources.

Stephen Elsden, chief executive of Compaid, said: "Big Blue Box marks the first ever fan convention for Doctor Who in Tunbridge Wells, which has a long history of associations with the show.

"From a screening of a classic Peter Cushing Dalek movie to more recent fan films, we will be taking full advantage of Trinity's superb theatre."

Tickets cost £25 for the day, and are available from Trinity Theatre's box office on 01892 678678 or online at www.trinitytheatre.net.

Caption: BIG BLUE BOX: The event is sure to appeal to Dr Who fans