Dr Who turns over a new leaf 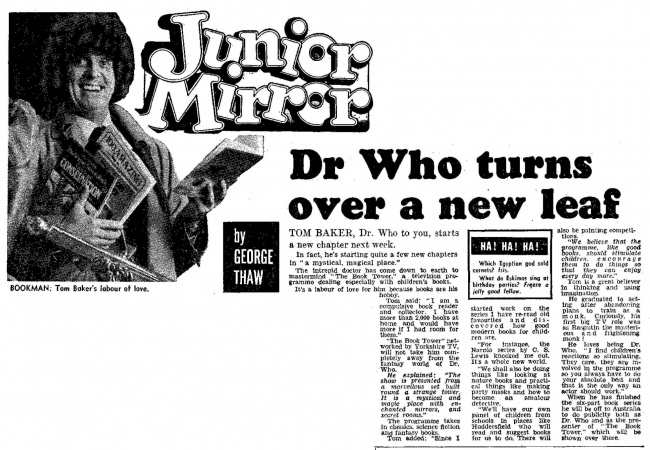 TOM BAKER, Dr. Who to you, starts a new chapter nest week.

In fact, he's starting quite a few new chapters in "a mystical, magical place."

The intrepid doctor has come down to earth to mastermind "The Book Tower," a television programme dealing especially with children's books.

It's a labour of love for him because books are his hobby.

Tom said: "I sin a compulsive book reader and collector. I have more than 2,000 books at home and would have more if I had moth for them."

"The Hook Tower" networked by Yorkshire TV, will not take him completely away from the fantasy world of Dr. Who.

He explained: "The show is presented from a marvellous set built round a strange tower. It is a mystical and magic place with enchanted mirrors, and secret rooms."

The programme takes in classics, science fiction and fantasy books.

Tom added: "Since started work on the series I have re-read old favourites and discovered how good modern books for children are.

"For instance, the Narnia series by C. S. Lewis knocked me out. Its a whole new world.

"We shall also be doing things like looking at nature books and practical things like making party masks and how to become an amateur detective.

"We'll have our own panel of children from schools in places like Huddersfield who will read and suggest books for us to do. There will also be painting competitions.

"We believe that the programme, like good books, should stimulate children, encourage them to do things so that they can enjoy every day more."

Tom is a great believes in thinking and using imagination.

He graduated to acting after abandoning plans to train as a monk. Curiously, his first big TV role was as Rasputin the mysterious and frightening monk !

He loves being Dr. Who. "I find children's reactions so stimulating. They care, they are involved in the programme so you always have to do your absolute best and that is the only way an actor should work."

When he has finished the six-part book series he will be off to Australia to do publicity both as Dr. Who and as the presenter of ":The Book Tower." which will be shown over 'there.