Getting the Job was a Godsend 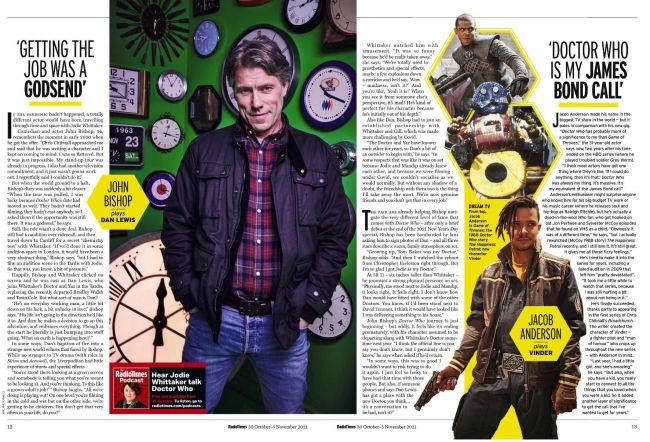 IF THE PANDEMIC hadn't happened, a totally different actor would have been travelling through time and space with Jodie Whittaker.

Comedian and actor John Bishop, 54, remembers the moment in early 2020 when he got the offer. "Chris Chibnall approached me and said that he was writing a character and I kept on coming to mind. I was so flattered. But it was just impossible. My stand-up tour was already in progress, I also had another television commitment, and it just wasn't gonna work out. I regretfully said I couldn't do it."

But when the world ground to a halt, Bishop's diary was suddenly a bit clearer. "When the tour was pulled, I was lucky because Doctor Who's date had moved as well. They hadn't started filming, they hadn't cast anybody, so I asked them if the opportunity was still there. It was a godsend," he says.

Still, the role wasn't a done deal. Bishop still had to audition over videocall, and then travel down to Cardiff for a secret "chemistry test" with Whittaker. "If we'd done it in some audition space in London, it would have been a very abstract thing," Bishop says, "but I had to film an audition scene in the Tardis with Jodie. So that was, you know, a bit of pressure."

Happily, Bishop and Whittaker clicked on screen and he was cast as Dan Lewis, who joins Whittaker's Doctor and Yaz in the Tardis, replacing the recently departed Bradley Walsh and Tosin Cole. But what sort of man is Dan?

"He's an everyday working man, a little bit down on his luck, a bit unlucky in love," Bishop says. "His life isn't going in the direction he'd like it to. And then he makes a decision to go on this adventure, and embraces everything. Though at the start he literally is just bumping into stuff going, 'What on earth is happening here?"

In some ways, Dan's baptism of fire into a strange new world echoes that faced by Bishop. While no stranger to TV drama (with roles in Skins and Accused), the Liverpudlian had little experience of stunts and special effects.

"You're stood there looking at a green screen and somebody is telling you what you're meant to be looking at. And you're thinking, 'Is this like a grown adult's job?" Bishop laughs. "All we're doing is playing out! On one level, you're filming in the cold and wet but on the other side, we're getting to be children. You don't get that very often in your life, do you?"

Whittaker watched him with amusement. "It was so funny because he'd be really taken away," she says. "We're totally used to prosthetics and special effects, maybe a few explosions down a corridor and he'd say, 'Wow - madness, isn't it?' And you're like, 'Yeah it is!' When you see it from someone else's perspective, it's mad! He's kind of perfect for his character because he's initially out of his depth."

Also like Dan, Bishop had to join an established partnership with Whittaker and Gill, which was made more challenging by Covid.

"The Doctor and Yaz have known each other for years, so Dan's a bit of an outsider to begin with," he says. "In some respects that was like it was on set because Jodie and Mandip already knew each other, and because we were filming under Covid, we couldn't socialise as we would normally. But without any shadow of a doubt, the friendship with them two is the thing I'll take away the most. We're now genuine friends and you don't get that in every job."

THE PAIR ARE already helping Bishop navigate the very different level of fame that comes with Doctor Who - after only a brief debut at the end of the 2021 New Year's Day special, Bishop has been bombarded by fans asking him to sign photos of Dan - and all three stars describe a warm, family atmosphere on set. "Growing up, Tom Baker was my Doctor," Bishop adds. "And then I watched the reboot from Christopher Eccleston right through. But I'm so glad I got Jodie as my Doctor."

At 5ft 11 - six inches taller than Whittaker he promises a strong physical presence on set. "Physically, me stood next to Jodie and Mandip, it looks right. It feels right. I don't know how Dan would have fitted with some of the other Doctors. You know, if I'd been stood next to David Tennant, I think it would have looked like I was delivering something to his house."

John Bishop's Doctor Who journey is just beginning - but oddly, it feels like it's ending prematurely, with his character assumed to be departing along with Whittaker's Doctor sometime next year. "I think the official line is you say you don't know, but I genuinely don't know," he says when asked if he'd return.

"In some ways, this was so good I wouldn't want to risk trying to do it again. I just feel so lucky to have had that time with those people. But also, if someone phones and says Dan Lewis has got a place with the new Doctor, you think... it's a conversation to be had, isn't it?"

Jacob Anderson made his name in the biggest TV show in the world — but it pales in comparison with his new gig. "Doctor Who has probably more of a significance to me than Game of Thrones," the 31-year-old actor says now, two years after his time ended on the HBO series (where he played troubled soldier Grey Worm). "I think most actors have got one thing where they're like, 'If I could do anything, then it's that.' Doctor Who was always my thing. It's massive. It's my equivalent of the James Bond call."

Anderson's enthusiasm might surprise anyone who knows him for his big-budget TV work or his music career (where he releases soul and hip-hop as Raleigh Ritchie), but he's actually a dyed-in-the-wool Who fan, who got hooked on old Jon Pertwee and Sylvester McCoy episodes that he found on VHS as a child. "Obviously it was of a different time," he says, "but I actually rewatched [McCoy 1988 story] The Happiness Patrol recently, and I still love it. It's still great. It gives me all those fizzy feelings." He's tried to make it into the series for years, including a failed audition in 2009 that left him "pretty devastated".

"It took me a little while to watch that series, because I was still hurting a bit about not being in it." He's finally succeeded, thanks partly to appearing in the first series of Chris Chibnall's Broadchurch. The writer created the character of Vinder — a fighter pilot and "man of honour" who crops up throughout the new series — with Anderson in mind.

"Last year, I had a little girl, and she's amazing," he says. "But also, when you have a kid, you really start to connect to all the things that you loved when you were a kid. So it added another layer of significance to get the call that I've wanted to get for years."