I chased an actor dressed up as an alien pig on my first day ... it was bonkers 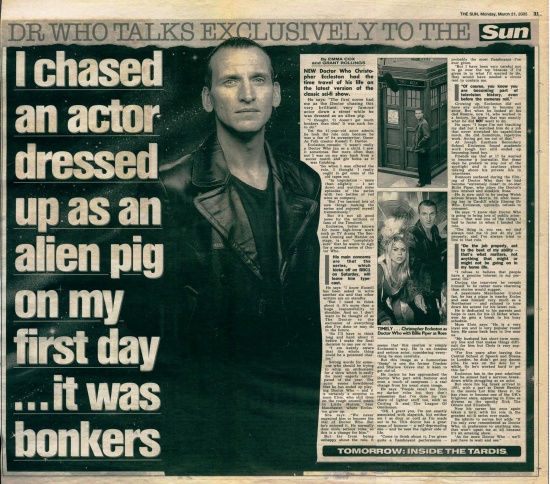 DR WHO TALKS EXCLUSIVELY TO THE THE SUN

NEW Doctor Who Christopher Eccleston had the time travel of his life on the latest version of the classic sci-fi show.

He says: "The first scene had me as the Doctor chasing this very brilliant, very famous actor down a street while he was dressed as an alien pig.

"I thought, 'It doesn't get much bonkers than this!' It was such fun to do."

Yet the 41-year-old actor admits he took the role only because he was a fan of its screenwriter. Queer As Folk creator Russell T. Davies.

Eccleston reveals: "I wasn't really a Doctor Who fan as a child. I saw it sometimes. But more often than not I was on my way back from a soccer match and got home as it was finishing.

"So when I was offered the role, I thought I really ought to get some of the old tapes out.

"In trepidation — more than slightly — I sat down and watched some episodes of the series with two bottles of red wine as company.

"But I've learned lots of new things making the series and enjoyed myself tremendously."

But it's not all good news for the millions of fans of the Timelord. Eccleston, better known for more high-brow work such as TV drama The Second Coming and Hamlet on stage, is not "completely sure" that he wants to sign for a second series of Doctor Who.

His main concerns are that the series, which kicks off on BBC1 on Saturday, will leave him typecast. He says: "I know Russell has been asked to write another six and that other writers are on standby. "But I need to think about it. It's more than a huge responsibility to shoulder. And no, I don't want to be thought of as The Doctor to the exclusion of everything else I've done or may do in the future.

"So I'll have to think long and hard about it before I make the final decision to say yes or no.

"I am keenly aware that the whole thing could be a poisoned chalice."

Strong words for someone who should be trying to whip up enthusiasm for a show which is easily the most eagerly anticipated of the year. The actor seems bewildered that he has ended up playing Doctor Who — and it is certainly a surprise to mum Elsie. who still lives on the rough council estate in Little Hutton, near Manchester, where Eccles-ton grew up.

She says: "We never expected him to become the star of Doctor Who. But he's enjoyed it. He normally does more serious roles, so this is a change for him."

But far from being unhappy about the role, it seems that this caution is simply Eccleston's way. He is an intense and serious actor, considering everything he says carefully.

But this image as a humourless "thesp" is one the former Cracker and Shallow Grave star is keen to get rid of.

He insists he has approached the Doctor Who part with humour and even a touch of campness — a real change from his usual stern image.

He says: "People recall me from my darker roles but they don't remember that I've done my fair share of lighter stuff too, such as Cutting It and The League Of Gentlemen.

"OK, I grant you. I'm not exactly associated with slapstick, but neither am I as dour or cold as I'm made out to be. This doctor has a great sense of humour — a self-deprecating one — and he sees the lighter side of life.

"Come to think about it, I've given quite a flamboyant performance — probably the most flamboyant I've ever given.

"But I have been very careful not to go over the top because if I'd given in to what I'd wanted to do, they would have needed a circus tent to contain me.

Of course, you know you are becoming part of television history, even before the cameras roll."

Growing up. Eccleston did not have any ambition to become an actor. But when he looked at his dad Ronnie, now 74, who worked in a factory, he knew that was exactly what he did NOT want to do.

He says: "I hope I'm not insulting my dad but I watched him do a job that never stretched his capabilities much. He did humdrum, repetitive work. Acting got me out of that."

Friends say that at 17 he wanted to become a journalist. But these days he prefers to stay out of the spotlight and is cautious about talking about his private life in interviews.

Rumours surfaced during the filming of Doctor Who that he had become "extremely close" to co-star Billie Piper, who plays the Doctor's love interest and sidekick, Rose.

He is now said to be seeing Welsh actress Siwan Morris. 29, after meeting her in Cardiff while filming Dr Who. Eccleston, typically. refuses to comment.

He says: "I know that Doctor Who is going to bring lots of public attention — that was one of the things I had to factor in when I landed the role.

"The thing is, you see, my dad always told me to just do my job properly, and I've always tried to live to that rule.

"Do the job properly, act to the best of my ability —that's what matters. not anything that might or might not be going on in my home life.

"I refuse to believe that people have a genuine interest in my personal life."

During the interview he reveals himself to be rather more charming than stories would suggest.

A passionate Manchester United fan, he has a place in nearby Eccles and sees himself very much as a Northerner — and refused to tone down his accent for his latest role.

He is dedicated to his parents and helps to care for his ill father whenever he gets a break in his busy schedule.

Mum Elsie says: "He, is a very loyal son and is very popular round here. He came back here to live near us.

"My husband has short-term memory loss and that makes things difficult for him but Chris is very supportive.

"For five years after leaving the Central School of Speech and Drama in London, he didn't get any decent jobs. He was on the dole for a while. So he's worked hard to get this far."

Eccleston has in the past admitted that he almost had a nervous breakdown while struggling as an actor.

But since his big break arrived in 1991, with a part as Derek Bentley in the movie Let Him Have It, he has risen to become one of the UK's brightest stars, appearing in films as diverse as the spooky flick The Others and Elizabeth.

Now his career has once again taken a turn, with his role in the greatest sci-fi series ever made.

He admits to nerves but adds: "If I'm only ever remembered as Doctor Who, in preference to anything else, that won't upset me at all because it's an amazing show.

"As for more Doctor Who — we'll just have to wait and see."

TOMORROW: INSIDE THE TARDIS

Caption: TIMELY ... Christopher Eccieston as Doctor Who with Billie Piper as Rose