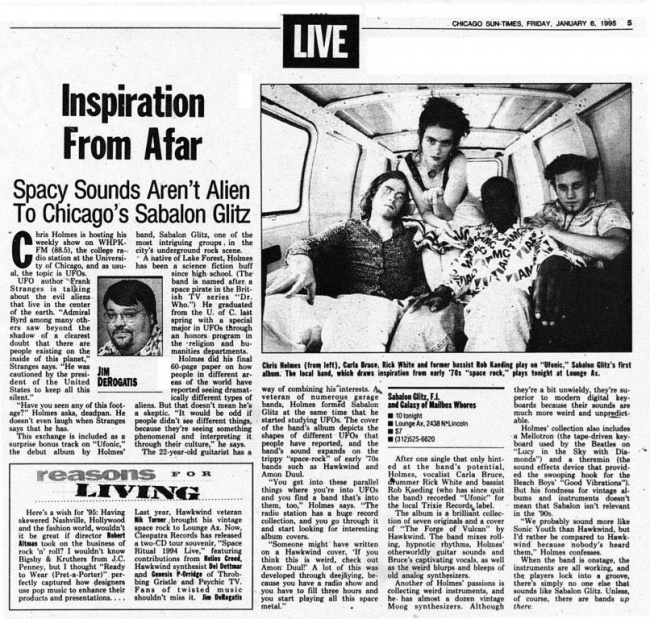 Chris Holmes is hosting his weekly show on WHPK-FM (88.5), the college radio station at the University of Chicago, and as usual, the topic is UFOs.

UFO author Frank Stranges is talking about the evil aliens that live in the center of the earth. "Admiral Byrd among many others saw beyond the shadow of a clearest doubt that there are people existing on the inside of this planet," Stranges says. "He was cautioned by the president of the United States to keep all this silent."

"Have you seen any of this footage?" Holmes asks, deadpan. He doesn't even laugh when Stranges says that he has.

This exchange is included as a surprise bonus track on "Ufonic," the debut album by Holmes' band, Sabalon Glitz, one of the most intriguing groups in the city's underground rock scene.

A native of Lake Forest, Holmes has been a science fiction buff since high school. (The band is named after a space pirate in the British TV series " Dr. Who .") He graduated from the U. of C. last spring with a special major in UFOs through an honors program in the religion and humanities departments.

Holmes did his final 60-page paper on how people in different areas of the world have reported seeing dramatically different types of aliens. But that doesn't mean he's a skeptic. "It would be odd if people didn't see different things, because they're seeing something phenomenal and interpreting it through their culture," he says.

The 22-year-old guitarist has a way of combining his interests. A veteran of numerous garage bands, Holmes formed Sabalon Glitz at the same time that he started studying UFOs. The cover of the band's album depicts the shapes of different UFOs that people have reported, and the band's sound expands on the trippy "space-rock" of early '70s bands such as Hawkwind and Amon Duul.

"You get into these parallel things where you're into UFOs and you find a band that's into them, too," Holmes says. "The radio station has a huge record collection, and you go through it and start looking for interesting album covers.

"Someone might have written on a Hawkwind cover, 'If you think this is weird, check out Amon Duul!' A lot of this was developed through deejaying, because you have a radio show and you have to fill three hours and you start playing all this space metal."

After one single that only hinted at the band's potential, Holmes, vocalist Carla Bruce, drummer Rick White and bassist Rob Kaeding (who has since quit the band) recorded "Ufonic" for the local Trixie Records label.

The album is a brilliant collection of seven originals and a cover of "The Forge of Vulcan" by Hawkwind. The band mixes rolling, hypnotic rhythms, Holmes' otherworldly guitar sounds and Bruce's captivating vocals, as well as the weird blurps and bleeps of old analog synthesizers.

Another of Holmes' passions is collecting weird instruments, and he has almost a dozen vintage Moog synthesizers. Although they're a bit unwieldy, they're superior to modern digital keyboards because their sounds are much more weird and unpredictable.

Holmes' collection also includes a Mellotron (the tape-driven keyboard used by the Beatles on "Lucy in the Sky with Diamonds") and a theremin (the sound effects device that provided the swooping hook for the Beach Boys' "Good Vibrations"). But his fondness for vintage albums and instruments doesn't mean that Sabalon isn't relevant in the '90s.

"We probably sound more like Sonic Youth than Hawkwind, but I'd rather be compared to Hawkwind because nobody's heard them," Holmes confesses.

When the band is onstage, the instruments are all working, and the players lock into a groove, there's simply no one else that sounds like Sabalon Glitz. Unless, of course, there are bands up there.