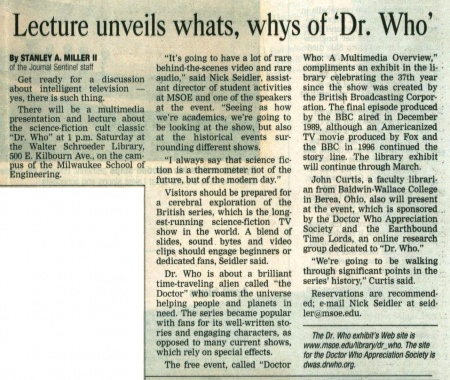 Get ready for a discussion about intelligent television —yes, there is such thing.

There will be a multimedia presentation and lecture about the science-fiction cult classic "Dr. Who" at 1 p.m. Saturday at the Walter Schroeder Library, 500 E. Kilbourn Ave., on the campus of the Milwaukee School of Engineering.

"It's going to have a lot of rare behind-the-scenes video and rare audio," said Nick Seidler, assistant director of student activities at MSOE and one of the speakers at the event. "Seeing as how we're academics, we're going to be looking at the show, but also at the historical events surrounding different shows.

"I always say that science fiction is a thermometer not of the future, but of the modern day."

Visitors should be prepared for a cerebral exploration of the British series, which is the longest-running science-fiction TV show in the world. A blend of slides, sound bytes and video clips should engage beginners or dedicated fans, Seidler said.

Dr. Who is about a brilliant time-traveling alien called "the Doctor" who roams the universe helping people and planets in need. The series became popular with fans for its well-written stories and engaging characters, as opposed to many current shows, which rely on special effects.

The free event, called "Doctor Who: A Multimedia Overview," compliments an exhibit in the library celebrating the 37th year since the show was created by the British Broadcasting Corporation. The final episode produced by the BBC aired in December 1989, although an Americanized TV movie produced by Fox and the BBC in 1996 continued the story line. The library exhibit will continue through March.

John Curtis, a faculty librarian from Baldwin-Wallace College in Berea, Ohio, also will present at the event, which is sponsored by the Doctor Who Appreciation Society and the Earthbound Time Lords, an online research group dedicated to "Dr. Who."

"We're going to be walking through significant points in the series' history," Curtis said.

The Dr. Who exhibit's Web site is www.msoe.edu/libraty/dr_who. The site for the Doctor Who Appreciation Society is dwas.drwho.org.