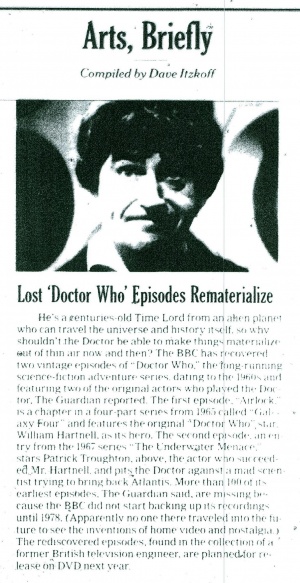 He's a centuries-old Time Lord from an alien planet who can travel the universe and history itself, so why shouldn't the Doctor be able to make things materialize out of thin air now and then?

The BBC has recovered two vintage episodes of "Doctor Who," the long-running science-fiction adventure series, dating to the 1960s and featuring two of the original actors who played the Doctor, The Guardian reported.

The first episode, "Airlock," is a chapter in a four-part series from 1965 called "Galaxy Four" and features the original "Doctor Who" star, William Hartnell, as its hero. The story line revolves around a race of female clones called Drahvins and includes an appearance by the Chumblies, robots who recur throughout the series. The second episode, an entry from the 1967 series "The Underwater Menace," stars Patrick Troughton, the actor who succeeded Mr. Hartnell, and pits the doctor against a mad scientist trying to bring back Atlantis.

In the nearly 50-year history of the "Doctor Who" franchise the Doctor has been portrayed (in his official incarnations) by 11 different actors including the show's current star, Matt Smith. More than 100 of its earliest episodes, The Guardian said, are missing because the BBC did not start backing up its recordings until 1978. (Apparently no one there traveled into the future to see the inventions of home video and nostalgia.)

The rediscovered episodes, found in the collection of a former British television engineer, are planned for release on DVD next year.

CORRECTION: This article has been revised to reflect the following correction: A report in the "Arts, Briefly" column on Dec. 13 about the discovery of two old episodes from the BBC's "Doctor Who" television series that were believed to be lost misstated the series' history. It began nearly 50 years ago, not 40.

This is a more complete version of the story than the one that appeared in print.