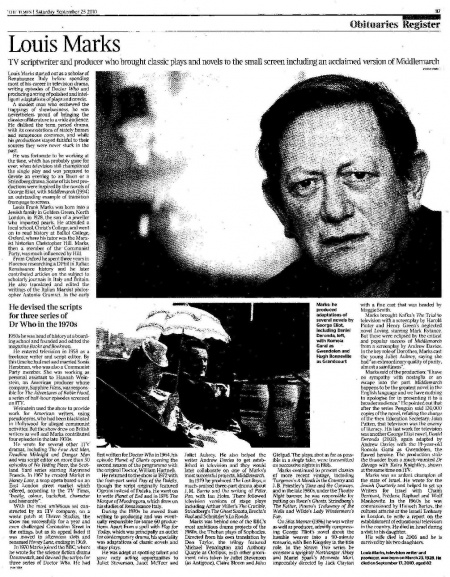 Louis Marks started out as a scholar of Renaissance Italy before spending most of his career in television drama, writing episodes of Doctor Who and producing a string of polished and intelligent adaptations of plays and novels.

A modest man who eschewed the trappings of showbusiness, he was nevertheless proud of bringing the classics of literature to a wide audience. He disliked the term period drama, with its connotations of stately homes and sumptuous costumes, and while his productions stayed faithful to their sources they were never stuck in the past.

He was fortunate to be working at the time, which has probably gone for ever, when television still championed the single play and was prepared to devote an evening to an Ibsen or a Strindberg drama. Some of his best productions were inspired by the novels of George Eliot, with Middlemarch (1994) an outstanding example of transition from page to screen.

Louis Frank Marks was born into a Jewish family in Golders Green, North London, in 1928, the son of a jeweller who imported pearls. He attended a local school, Christ's College, and went on to read history at Balliol College, Oxford, where his tutor was the Marxist historian Christopher Hill. Marks, then a member of the Communist Party, was much influenced by Hill.

From Oxford he spent three years in Florence researching a DPhil in Italian Renaissance history and he later contributed articles on the subject to scholarly journals in Italy and Britain. He also translated and edited the writings of the Italian Marxist philosopher Antonio Gramsci. In the early 1950s he was head of history at a boarding school and founded and edited the magazine Books and Bookmen.

He entered television in 1958 as a freelance writer and script editor. By this time he had met and married Sonia Herstman, who was also a Communist Party member. She was working as personal assistant to Hannah Weinstein, an American producer whose company, Sapphire Films, was responsible for The Adventures of Robin Hood, a series of half-hour episodes screened on ITV.

Weinstein used the show to provide work for American writers, using pseudonyms, who had been blacklisted in Holly-wood for alleged communist activities. But the show drew on British writers as well and Marks contributed four episodes in the late-1950s.

He wrote for several other ITV dramas, including The Four Just Men, Deadline Midnight and Danger Man and was script editor on more than 50 episodes of No Hiding Place, the Scotland Yard series starring Raymond Francis. In 1967 he created Market in Honey Lane, a soap opera based on an East London street market which offered, according to the TV Times, "bustle, colour, backchat, character and humanity".

With the most ambitious set constructed by an ITV company, on a waste patch at Elstree Studios, the show ran successfully for a year and even challenged Coronation Street in the ratings, but as its appeal faded it was moved to afternoon slots and renamed Honey Lane, ending in 1969.

In 1970 Marks joined the BBC, where he wrote for the science fiction drama Doomwatch, and devised the scripts for three series of Doctor Who. He had first written for Doctor Who in 1964, his episode Planet of Giants opening the second season of the programme with the original Doctor, William Hartnell.

He returned to the show in 1972 with the four-part serial Day of the Daleks, though the script originally featured Ogrons instead of Daleks. He went on to write Planet of Evil and in 1976 The Masque of Mandragora, which drew on his studies of Renaissance Italy.

During the 1970s he moved from writing to producing and was eventually responsible for some 60 productions. Apart from a spell with Play for Today, which was principally an outlet for contemporary drama, his speciality was adaptations of classic novels and stage plays.

He was adept at spotting talent and gave early acting opportunities to Juliet Stevenson, Janet McTeer and Juliet Aubrey. He also helped the writer Andrew Davies to get established in television and they would later collaborate on one of Marks's most successful projects, Middlemarch.

In 1979 he produced The Lost Boys, a much-praised three-part drama about J. M. Barrie and the writing of Peter Pan, with Ian Holm. There followed television versions of stage plays including Arthur Miller's The Crucible, Strindberg's The Ghost Sonata, Brecht's Baal and Schnitzler's La Ronde.

Marks was behind one of the BBC's most ambitious drama projects of the 1980s, the Theban plays of Sophocles. Directed from his own translation by Don Taylor, the trilogy featured Michael Pennington and Anthony Quayle as Oedipus, with other prominent roles taken by Juliet Stevenson (as Antigone), Claire Bloom and John Gielgud. The plays, shot as far as possible in a single take, were transmitted on successive nights in 1986.

Marks continued to present classics of more recent vintage, including Turgenev's A Month in the Country and J. B. Priestley's Time and the Conways, and in the late 1980s, under the Theatre Night banner, he was responsible for putting on Ibsen's Ghosts, Strindberg's The Father, Pinero's Trelawney of the Wells and Wilde's Lady Windermere's Fan.

On Silas Marner (1986) he was writer as well as producer, adroitly compressing George Eliot's novel about the humble weaver into a 90-minute scenario, with Ben Kingsley in the title role. In the Screen Two series he oversaw a sprightly Northanger Abbey and Muriel Spark's Memento Mori, impeccably directed by Jack Clayton with a fine cast that was headed by Maggie Smith.

Marks brought Kafka's The Trial to television with a screenplay by Harold Pinter and Henry Green's neglected novel Loving, starring Mark Rylance. But these were eclipsed by the critical and popular success of Middlemarch from a screenplay by Andrew Davies. In the key role of Dorothea, Marks cast the young Juliet Aubrey, saying she had "an extraordinary quality of purity, almost a saintliness".

Marks said of the production: "I have no sympathy with nostaglia or an escape into the past. Middlemarch happens to be the greatest novel in the English language and we have nothing to apologise for in presenting it to a broader audience." He pointed out that after the series Penguin sold 120,000 copies of the novel, refuting the charge of the then Education Secretary, John Patten, that television was the enemy of literacy. His last work for television was another George Eliot novel, Daniel Deronda (2002), again adapted by Andrew Davies with the 19-year-old Romola Garai as Gwendolen, the flawed heroine. The production stole the thunder from a much-vaunted Dr Zhivago with Keira Knight-ley, shown at the same time on ITV.

Marks was an ardent champion of the state of Israel. He wrote for the Jewish Quarterly and helped to set up Writers for Israel with Chaim Bermant, Frederic Raphael and Wolf Mankowitz. In the 1960s he was commissioned by Hanoch Bartov, the cultural attaché at the Israeli Embassy in London, to write a report on the establishment of educational television in the country. He died in Israel during a visit to his daughter.

His wife died in 2006 and he is survived by his two daughters.