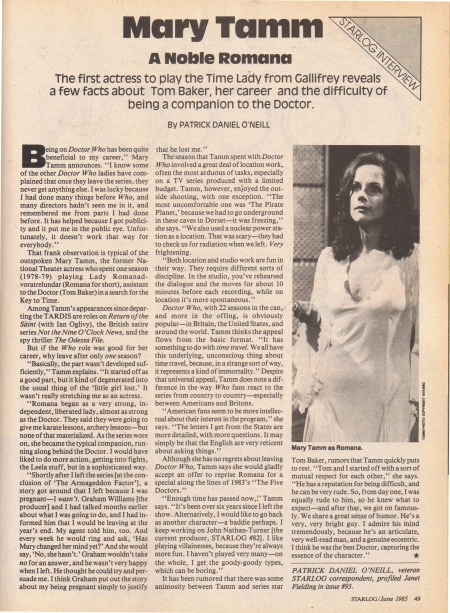 The first actress to play the Time Lady from Gallifrey reveals a few facts about Tom Baker, her career and the difficulty of being a companion to the Doctor.

Being on Doctor Who has been quite beneficial to my career," Mary Tamm announces. "I know some of the other Doctor Who ladies have complained that once they leave the series, they never get anything else. I was lucky because I had done many things before Who, and many directors hadn't seen me in it, and remembered me from parts I had done before. It has helped because I got publicity and it put me in the public eye. Unfortunately, it doesn't work that way for everybody."

That frank observation is typical of the outspoken Mary Tamm, the former National Theater actress who spent one season (1978-79) playing Lady Romanadvoratrelundar (Romana for short), assistant to the Doctor (Tom Baker) in a search for the Key to Time.

Among Tamm's appearances since departing the TARDIS are roles on Return of the Saint (with Ian Oglivy), the British satire series Not the Nine O'Clock News, and the spy thriller The Odessa File.

But if the Who role was good for her career, why leave after only one season?

"Basically, the part wasn't developed sufficiently," Tamm explains. "It started off as a good part, but it kind of degenerated into the usual thing of the 'little girl lost.' It wasn't really stretching me as an actress.

"Romana began as a very strong, independent, liberated lady, almost as strong as the Doctor. They said they were going to give me karate lessons, archery lessons—but none of that materialized. As the series wore on, she became the typical companion, running along behind the Doctor. I would have liked to do more action, getting into fights, the Leela stuff, but in a sophisticated way.

"Shortly after I left the series [at the conclusion of 'The Armageddon Factor'], a story got around that I left because I was pregnant—I wasn't. Graham Williams [the producer] and I had talked months earlier about what I was going to do, and I had informed him that I would be leaving at the year's end. My agent told him, too. And every week he would ring and ask, 'Has Mary changed her mind yet?' And she would say, 'No, she hasn't.' Graham wouldn't take no for an answer, and he wasn't very happy when I left. He thought he could try and persuade me. I think Graham put out the story about my being pregnant simply to justify that he lost me."

The season that Tamm spent with Doctor Who involved a great deal of location work, often the most arduous of tasks, especially on a TV series produced with a limited budget. Tamm, however, enjoyed the outside shooting, with one exception. "The most uncomfortable one was 'The Pirate Planet,' because we had to go underground in these caves in Dorset—it was freezing," she says. "We also used a nuclear power station as a location. That was scary—they had to check us for radiation when we left. Very frightening.

"Both location and studio work are fun in their way. They require different sorts of discipline. In the studio, you've rehearsed the dialogue and the moves for about 10 minutes before each recording, while on location it's more spontaneous."

Doctor Who, with 22 seasons in the can, and more in the offing, is obviously popular—in Britain, the United States, and around the world. Tamm thinks the appeal flows from the basic format. "It has something to do with time travel. We all have this underlying, unconscious thing about time travel, because, in a strange sort of way, it represents a kind of immortality." Despite that universal appeal, Tamm does note a difference in the way Who fans react to the series from country to country—especially between Americans and Britons.

"American fans seem to be more intellectual about their interest in the program," she says. "The letters I get from the States are more detailed, with more questions. It may simply be that the English are very reticent about asking things."

Although she has no regrets about leaving Doctor Who, Tamm says she would gladly accept an offer to reprise Romana for a special along the lines of 1983's "The Five Doctors."

"Enough time has passed now," Tamm says. "It's been over six years since I left the show. Alternatively, I would like to go back as another character—a baddie perhaps. I keep working on John Nathan-Turner [the current producer, STARLOG #82]. I like playing villainesses, because they're always more fun. I haven't played very many—on the whole, I get the goody-goody types, which can be boring."

It has been rumored that there was some animosity between Tamm and series star Tom Baker, rumors that Tamm quickly puts to rest. "Tom and I started off with a sort of mutual respect for each other," she says. "He has a reputation for being difficult, and he can be very rude. So, from day one, I was equally rude to him, so he knew what to expect—and after that, we got on famously. We share a great sense of humor. He's a very, very bright guy. I admire his mind tremendously, because he's an articulate, very well-read man, and a genuine eccentric. I think he was the best Doctor, capturing the essence of the character."