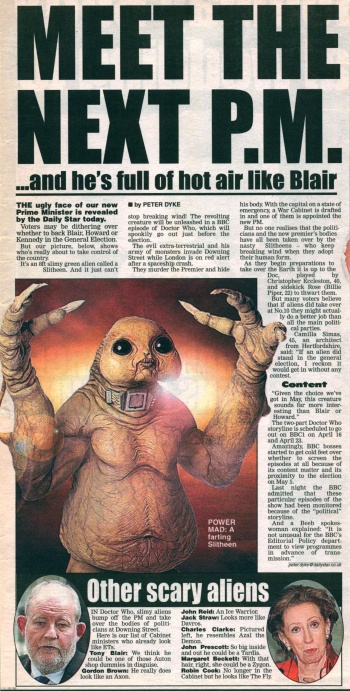 THE ugly face of our new Prime Minister is revealed by the Daily Star today.

Voters may be dithering over whether to back Blair, Howard or Kennedy in the General Election.

But our picture, below, shows who's really about to take control of the country.

It's an 8ft slimy green alien called a Slitheen. And it just can't by stop breaking wind! The revolting creature will be unleashed in a BBC episode of Doctor Who, which will spookily go out just before the election.

The evil extra-terrestrial and his army of monsters invade Downing Street while London is on red alert after a spaceship crash.

They murder the Premier and hide his body. With the capital on a state of emergency, a War Cabinet is drafted in and one of them is appointed the new PM.

But no one realises that the politicians and the new premier's bodies have all been taken over by the nasty Slitheens - who keep breaking wind when they adopt their human form.

As they begin preparations to take over the Earth it is up to the Doc, played by Christopher Eccleston, 40, and sidekick Rose (Billie Piper, 22) to thwart them. But many voters believe that if aliens did take over at No.10 they might actually do a better job than all the main political parties.

Camilla Simas, 45, an architect from Hertfordshire, said: "If an alien did stand in the general election, I reckon it would get in without any contest.

"Given the choice we've got in May, this creature sounds far more interesting than Blair or Howard."

The two-part Doctor Who storyline is scheduled to go out on BBC1 on April 16 and April 23.

Amazingly, BBC bosses started to get cold feet over whether to screen the episodes at all because of its content matter and its proximity to the election on May 5.

Last night the BBC admitted that these particular episodes of the show had been monitored because of the "political" storyline.

And a Beeb spokeswoman explained: "It is not unusual for the BBC's Editorial Policy department to view programmes in advance of transmission."

IN Doctor Who, slimy aliens bump off the PM and take over the bodies of politicians at Downing Street.

Tony Blair: We think he could be one of those Auton shop dummies in disguise.

Gordon Brown: He really does look like an Axon.

John Prescott: So big inside and out he could be a Tardis.

Margaret Beckett: With that hair, right, she could be a Zygon.

Robin Cook: No longer in the Cabinet but he looks like The Fly.