Meet the Next Utterly Iconic Doctor 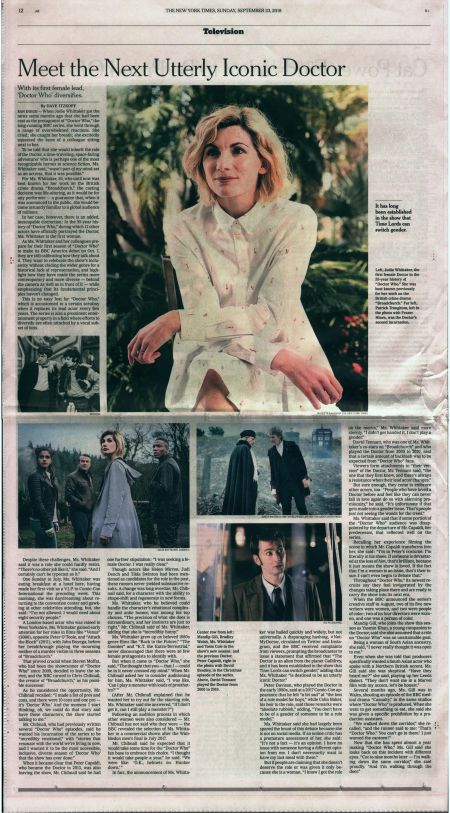 With its first female lead, 'Doctor Who' diversifies.

SAN DIEGO — When Jodie Whittaker got the news some months ago that she had been cast as the protagonist of "Doctor Who," the long-running BBC series, she went through a range of overwhelmed reactions. She cried; she caught her breath; she excitedly squeezed the knee of a colleague sitting next to her.

To be told that she would inherit the role of the Doctor, a time-traveling, space-faring adventurer who is perhaps one of the most recognizable heroes in science fiction, Ms. Whittaker said, "wasn't part of my mind-set as an actress, that it was possible."

For Ms. Whittaker, 36, who until now was best known for her work on the British crime drama "Broadchurch," the casting decision was life-altering, as it would be for any performer — a guarantee that, when it was announced to the public, she would become instantly familiar to a global audience of millions.

In her case, however, there is an added, inescapable distinction: In the 55-year history of "Doctor Who," during which 12 other actors have officially portrayed the Doctor, Ms. Whittaker is the first woman.

As Ms. Whittaker and her colleagues prepare for their first season of "Doctor Who" to make its BBC America debut on Oct. 7, they are still calibrating how they talk about it. They want to celebrate the show's inclu-sivity without chiding the wider genre for a historical lack of representation, and highlight how they have made the series more contemporary and more diverse — behind the camera as well as in front of it — while emphasizing that its fundamental principles haven't changed.

This is no easy feat for "Doctor Who," which is accustomed to a certain scrutiny when it replaces its lead actor every few years. The series is also a prominent entertainment property in a field where efforts to diversify are often attacked by a vocal subset of fans.

Despite these challenges, Ms. Whittaker said it was a role she could hardly resist. "There's no other job like it," she said. "And I certainly can't be typecast as it."

One Sunday in July, Ms. Whittaker was eating breakfast at a hotel here, having made her first visit as a V.I.P. to Comic-Con International the preceding week. This morning, she was daydreaming about returning to the convention center and gawking at other celebrities attending, but, she said: "I'm not allowed. I would need about eight security people"

A London-based actor who was raised in West Yorkshire, Ms. Whittaker gained early attention for her roles in films like "Venus" (2006), opposite Peter O'Toole, and "Attack the Block" (2011), with John Boyega, before her breakthrough playing the mourning mother of a murder victim in three seasons of "Broadchurch."

That proved crucial when Steven Moffat, who had been the showrunner of "Doctor Who" since 2009, decided to leave the series, and the BBC turned to Chris Chibnall, the creator of "Broadchurch," as his possible successor.

As he considered the opportunity, Mr. Chibnall recalled: "I made a list of pros and cons, and there were 10 cons and one pro — it's 'Doctor Who: And the moment I start thinking, oh, we could do that story and have those characters, the show started talking to me."

Mr. Chibnall, who had previously written several "Doctor Who" episodes, said he wanted his incarnation of the series to be "incredibly emotional," with "stories that resonate with the world were living in now, and I wanted it to be the most accessible, inclusive, diverse season of 'Doctor Who' that the show has ever done."

When it became clear that Peter Capaldi, who became the Doctor in 2013, was also leaving the show, Mr. Chibnall said he had one further stipulation: "I was seeking a female Doctor. I was really clean"

Though actors like Helen Mirren, Judi Dench and Tilda Swinton had been mentioned as candidates for the role in the past, these rumors never yielded substantive results. A change was long overdue, Mr. Chibnall said, for a character with the ability to shape-shift and regenerate in new forms.

Ms. Whittaker, who he believed could handle the character's emotional complexity and antic humor, was among his top choices. "The precision of what she does is extraordinary, and her instincts are just so right," Mr. Chibnall said of Ms. Whittaker, adding that she is "incredibly funny?"

Ms. Whittaker grew up on beloved 1980s genre films like "Back to the Future," "The Goonies" and E.T." the Extra-Terrestrial," never discouraged that there were so few female protagonists to identify with.

But when it came to "Doctor Who, she said, "The thought that you — that I — could be in it never crossed my mind." When Mr. Chibnall asked her to consider auditioning for him, Ms. Whittaker said, "I was like, 'Can I play a monster with loads of prosthetics?'"

(After Mr. Chibnall explained that he wanted her to try out for the starring role, Ms. Whittaker said she answered, "If I don't get it, can I still play a monster?")

Following an audition process in which other women were also considered — Mr. Chibnall has not said who they were — the BBC revealed the selection of Ms. Whittaker in a commercial shown after the Wimbledon men's final in July 2017.

Mr. Chibnall said he expected that it would take some time for the "Doctor Who" fan base to embrace this choice. "I thought it would take people a year," he said. "We were like: 'O.K., helmets on. Hunker down:"

In fact, the announcement of Ms. Whittaker was hailed quickly and widely, but not universally. A disparaging hashtag, #Not-MyDoctor, circulated on Twitter and Insta-gram, and the BBC received complaints from viewers, prompting the broadcaster to issue a statement that affirmed that "The Doctor is an alien from the planet Gallifrey, and it has been established in the show that Time Lords can switch gender," adding that Ms. Whittaker "is destined to be an utterly iconic Doctor?'

Peter Davison, who played the Doctor in the early 1980s, said at a 2017 Comic-Con appearance that he felt "a bit sad" at "the loss of a role model for boys," while Colin Baker, his heir to the role, said those remarks were "absolute rubbish," adding, "You don't have to be of a gender of someone to be a role model."

Ms. Whittaker said she had largely been spared the brunt of this debate because she is not on social media. If an online critic has a premature assessment of her, she said: "It's not a fact — it's an opinion. I have no issue with someone having a different opinion from me. I don't necessarily want to have my last meal with them."

But if people are claiming that she doesn't deserve the role or was given it only because she is a woman, "I know I got the role on the merits," Ms. Whittaker said more sternly. "I didn't get handed it. I don't play a gender."

David Tennant, who was one of Ms. Whit-taker's co-stars on "Broadchurch" and who played the Doctor from 2005 to 2010, said that a certain amount of backlash was to be expected from "Doctor Who fans.

Viewers form attachments to "their version" of the Doctor, Mr. Tennant said, "the one that they first knew, and there's always a resistance when their lead actor changes."

But sure enough, they come to embrace other actors, too: "People who have loved a Doctor before and feel like they can never fall in love again do so with alarming promiscuity," he said. "It's unfortunate if that gets made into a gender issue. That's people just not seeing the woods for the trees."

Ms. Whittaker said that if some portion of the "Doctor Who" audience was disappointed by the departure of Mr. Capaldi, her predecessor, that reflected well on the series.

Recalling her experience filming the scene in which Mr. Capaldi transforms into her, she said: "I'm in Peter's costume. I'm literally in his shoes. If someone is devastated at the loss of him, that's brilliant, because it just means the show is loved. If the fact that I'm a woman is an issue, that's their issue. I can't even begin to debate that."

Throughout "Doctor Who," its newest recruits say they feel invigorated by the changes taking place there and are ready to carry the show into its next era.

Mandip Gill, who joins the show this season as Yasmin Khan, a young companion to the Doctor, said she also assumed that a role on "Doctor Who" was an unattainable goal.

Being a woman of South Asian ancestry, she said, "I never really thought it was open to me?"

Even when she was told that producers specifically wanted a South Asian actor who spoke with a Northern British accent, Ms. Gill said she was skeptical. "Have they heard me?" she said, playing up her Leeds dialect. "They don't want me in a Marvel film with my accent, let's be honest."

Several months ago, Ms. Gill was in Wales, shooting an episode of the BBC medical drama "Casualty," in the same studios where "Doctor Who" is produced. When she went to get something to eat, she said she was given a specific prohibition by a production assistant.

"We walked down the corridor," she recalled, "and the runner said to me: 'That's "Doctor Who. You can't go in there: I just wanted the canteen!"

Now that she has spent almost a year making "Doctor Who, Ms. Gill said she looks back on this incident with different eyes. "Cut to nine months later — I'm walking down the same corridor;' she said proudly. "And I'm walking through the door."

Caption: Left, Jodie Whittaker, the first female Doctor in the 55-year history of "Doctor Who." She was best known previously for her work on the British crime drama "Broadchurch." Far left, Patrick Troughton, left in the photo with Frazer Hines, was the Doctor's second incarnation.

Center row from left: Mandip Gill, Bradley Walsh, Ms. Whittaker and Tosin Cole in the show's new season; and the previous Doctor, Peter Capaldi, right in the photo with David Bradley, in the Christmas episode of the series. Above, David Tennant played the Doctor from 2005 to 2010.