Oh, the Agony of Being Dr Who 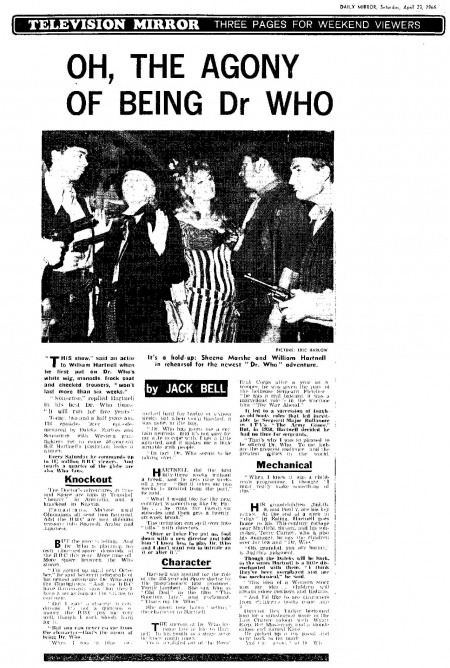 "This show," said an actor to William Hartnell when he first put on Dr. Who is white wig, monocle, frock coat and check trousers, "won't last more than six weeks."

"Nonsense," replied Hartnell in his best Dr. Who tones. "It will run for five years."

Today, two and a half years and 116 episodes later episodes after episodes menaced by Daleks, Zarbis and Sensorites with Western gunfighters yet to come, 59 year old Bill Hartnell's prediction looks a winner.

Every Saturday he commands up to 11 1/2 million BBC viewers. And nearly a quarter of the globe are also Who fans.

"The Doctor's adventures in time and space are tops in Trinidad, "bonzer" in Australia and a knockout in Nigeria.

Canadians, Maltese and Ghanaians all send him fan mail. And the BBC are now dubbing versions into Spanish, Arabic and Japanese.

But the pace is telling. And Dr. Who is planning his own [?] space demands of the BBC this year. More time off. More space between the Who stories.

"I'm sorted up until next October," he said between rehearsals of his newest adventure Dr. Who and the Gunfighters. "And the BBC have flatteringly said that they'll keep going as long as I'm able to continue.

"But I want a change in conditions. I'm not a question of money the BBC pay me very well, though I work bloody hard for it.

"But you can never escape from the character-- that's the agony of being Dr. Who.

"When I was in films, you worked hard for twelve or sixteen, weeks but when you'd finished, it was gone, in the bag.

Dr. Who has given me a certain neurosis and it's not easy for my wife to cope with. I get a little agitated and it makes me a little irritable with people.

"In fact Dr. Who seems to be taking over."

Hartnell did the first thirty-three weeks without a break, now he gets [?] weeks off a year. "But it takes me two weeks to unwind from the part," he said.

"What I would like for the next contract's something like Dr. Finley ... he runs for 26 episodes and then gets a 26 week break."

The irritation can spill over into [?] with directors.

Once or twice I've put my foot down with a new director and told him 'I know how to play Dr. Who and I don't want you to intrude on it or after it'."

Hartnell was spotted for the role of the 750 year-old Space doctor by the program's first producer Verity Lambert. She saw him as "Old Dad" in the film "This Sporting Life" and exclaimed "That's my Dr. Who."

The success of Dr. Who has come late in life to Hartnell. In his youth as a stage actor he knew rough times.

[?] Tank Corps after a year as a trooper, he was given the part of the bellicose Sergeant Fletcher. "He was a real bastard, it was a marvelous role" -- in the wartime film "The Way Ahead."

It led to a succession of tough old [?] roles that lead inevitably to Sergeant Major Bullimore in ITV's "The Army Game." But, in 1958, Hartnell decided he had no time for sergeants.

"That's why it's so pleased to be offered Dr. Who. To me kids are the greatest audience and the greatest [?] in the world.

"When I knew it was a children's programme, I thought I must really make something of this."

His grandchildren Judith, 9, and Paul, 7, are his key [?]. At the end of a week of [?] in Ealing, Hartnell goes home to his 17th-century cottage near Mayfield, Sussex, and his son-in-law Terry Carney, who is also his manager, brings the children over for tea and "Dr. Who."

"Oh granddad, you are barmy," is Judith's judgment.

Though the Daleks will be back, in the series Hartnell as a little disenchanted with them. "I think they've been overplayed and are too mechanical," he said.

"This idea of a western story was my idea .. children will always adore cowboys and Indians."

"And I'd like to see characters from children's books come into it."