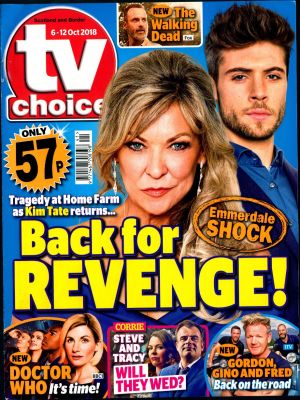 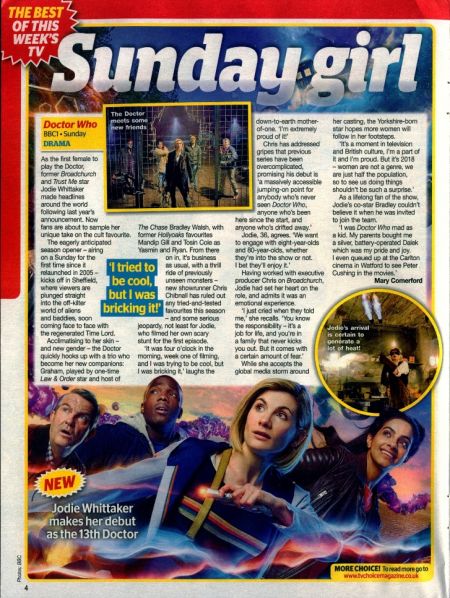 As the first female to play the Doctor, former Broadchurch and Trust Me star Jodie Whittaker made headlines around the world following last year's announcement. Now fans are about to sample her unique take on the cult favourite.

The eagerly anticipated season opener - airing on a Sunday for the first time since it relaunched in 2005 kicks off in Sheffield, where viewers are plunged straight into the off-kilter world of aliens and baddies, soon coming face to face with the regenerated Time Lord.

Acclimatising to her skin and new gender - the Doctor quickly hooks up with a trio who become her new companions: Graham, played by one-time Law & Order star and host of

gar The Chase Bradley Walsh, with former Hollyoaks favourites Mandip Gill and Tosin Cole as Yasmin and Ryan. From there on in, it's business as usual, with a thrill ride of previously unseen monsters new showrunner Chris Chibnall has ruled out any tried-and-tested favourites this season - and some serious jeopardy, not least for Jodie, who filmed her own scary stunt for the first episode.

'It was four o'clock in the morning, week one of filming, and I was trying to be cool, but I was bricking it,' laughs the down-to-earth mother-of-one. 'I'm extremely proud of it!'

Chris has addressed gripes that previous series have been overcomplicated, promising his debut is 'a massively accessible jumping-on point for anybody who's never seen Doctor Who,

Jodie, 36, agrees. 'We want to engage with eight-year-olds and 80-year-olds, whether they're into the show or not. I bet they'll enjoy it.'

Having worked with executive producer Chris on Broadchurch, Jodie had set her heart on the role, and admits it was an emotional experience.

'I just cried when they told me,' she recalls. You know the responsibility - it's a job for life, and you're in a family that never kicks you out. But it comes with a certain amount of fear.'

While she accepts the global media storm around her casting, the Yorkshire-born star hopes more women will follow in her footsteps.

'It's a moment in television and British culture, I'm a part of it and I'm proud. But it's 2018 - women are not a genre, we are just half the population, so to see us doing things shouldn't be such a surprise.'

As a lifelong fan of the show, Jodie's co-star Bradley couldn't believe it when he was invited to join the team.

'I was Doctor Who mad as a kid. My parents bought me a silver, battery-operated Dalek which was my pride and joy. I even queued up at the Carlton cinema in Watford to see Peter Cushing in the movies.'

Caption: Jodie's arrival is certain to generate a lot of heat!