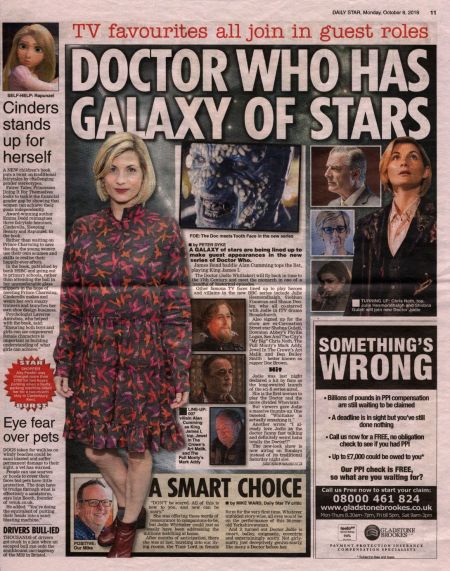 A GALAXY of stars are being lined up to make guest appearances in the new series of Doctor Who.

The Doctor (Jodie Whittaker) will fly back in time to the 17th Century and meet the monarch in one of a handful of historical episodes.

Other famous TV faces lined up to play heroes and villains in the new BBC series include Julie Hesmondhalgh, Siobhan Finneran and Shaun Dooley, who all co-starred with Jodie in ITV drama Broadchurch.

Jodie was last night declared a hit by fans as the long-awaited launch of the sci-fi series aired.

She is the first woman to play the Doctor and the move divided Whovians. But viewers gave Jodie a massive thumbs-up. One tweeted: "Whittaker is actually smashing it."

Another wrote: "I already love Jodie as the doctor funny fast talking and definitely weird haha totally the Doctor!!"

The new-look show is now airing on Sundays instead of its traditional Saturday night slot.

FOE: The Doc meets Tooth Face in the new series

"DON'T be scared. All of this is new to you, and new can be scary"

She was offering these words of reassurance to companions-to-be, but Jodie Whittaker could just as easily have been addressing the millions watching at home.

After months of anticipation, there she was at last, bursting into our living rooms, the Time Lord in female form for the very first time. Whatever unfolded story-wise, all eyes would be on the performance of this 36-year-old Yorkshirewoman.

And it turned out Doctor Jodie is smart, barlsy, enigmatic, eccentric and entertainingly scatty. Not girly-scatty, just deceptively genius-scatty, like many a Doctor before her.