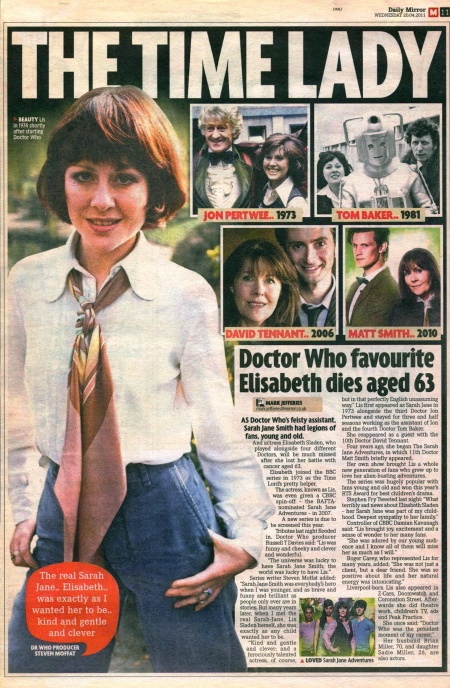 AS Doctor Who's feisty assistant, Sarah Jane Smith had legions of fans, young and old.

And actress Elisabeth Sladen, who played alongside four different Doctors, will be much missed after she lost her battle with cancer aged 63.

Elisabeth joined the BBC series in 1973 as the Time Lord's pretty helper.

The actress, known as Lis, was even given a CBBC spin-off - the BAFTA-nominated Sarah Jane Adventures - in 2007. A new series is due to be screened this year. Tributes last night flooded in. Doctor Who producer Russell T Davies said: "Lis was funny and cheeky and clever and wonderful.

Series writer Steven Moffat added: "Sarah Jane Smith was everybody's hero when I was younger, and as brave and funny and brilliant as people only ever are in stories. But many years later, when I met the real Sarah-Jane, Lis Sladen herself, she was exactly as any child wanted her to be.

"Kind and gentle and clever; and a ferociously talented actress, of course, but in that perfectly English unassuming way." Lis first appeared as Sarah Jane in 1973 alongside the third Doctor Jon Pertwee and stayed for three and half seasons working as the assistant of Jon and the fourth Doctor Tom Baker.

She reappeared as a guest with the 10th Doctor David Tennant.

Her own show brought Lis a whole new generation of fans who grew up to love her alien-busting adventures.

The series was hugely popular with fans young and old and won this year's RTS Award for best children's drama.

Stephen Fry Tweeted last night: "What terribly sad news about Elisabeth Sladen - her Sarah Jane was part of my childhood. Deepest sympathy to her family."

Controller of CBBC Damian Kavanagh said: "Lis brought joy, excitement and a sense of wonder to her many fans.

"She was adored by our young audience and I know all of them will miss her as much as I will."

Roger Carey, who represented Ls for many years, added: "She was not just a client, but a dear friend. She was so positive about life and her natural energy was intoxicating."

She once said: "Doctor Who was the proudest moment of my career." Her husband Brian Miller, 70, and daughter Sadie Miller, 26, are also actors.

Caption: BEAUTY Lis in 1974 shortly after starting Doctor Who